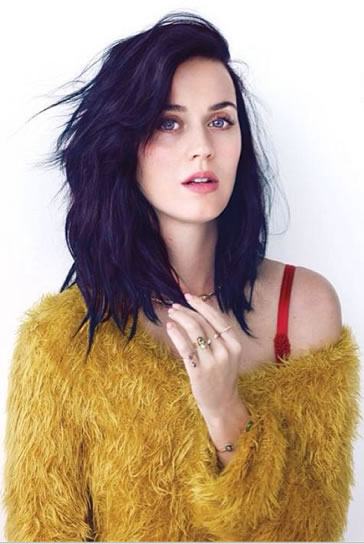 Katy Perry has been pretty quiet on the tattoo front these days, but the pop star has announced that she plans to get a new tattoo to celebrate her upcoming “Prism” world tour, set to begin in 2014. During an exclusive Q&A with the singer following a recent performance at the iHeartRadio Theater in Los Angeles, Katy Perry revealed that she may take her tattoo artist – Keith “Bang Bang” McCurdy – on the road with her during her Prism tour. Katy also hinted that, while she usually gets inked at the completion of each of her tours, she may get a Prism-inspired tattoo a little earlier than expected!

Back in 2009, Katy Perry got a cute little strawberry tattoo on her ankle in honor of her Hello Katy tour, and in 2011, she got a matching peppermint ankle tat after finishing her California Dreams tour. “We open it up to the band and the dancers and the crew,” Katy said about the tattoo tradition. “Even my manager is representing with a peppermint, which they probably hate!”

Now that we know there is a new Katy Perry tattoo in the works, the big question is…what image will she choose? Strawberries played a big role in the singer’s Hello Katy tour, which is why she opted to ink the fruit on her ankle, and the same is true for the peppermint-themed tattoo on her other ankle, which was inked backstage by Bang Bang after completing a set for her California Dreams tour. Our guess is that Katy Perry’s new tattoo will feature the stylized word “Prism” in the shape of an upside-down triangle, which appeared on a recent album promo for the pop star.

Although Katy Perry hasn’t yet officially announced her Prism world tour, the 2014 dates will be forthcoming and the 28-year-old singer promises that concertgoers will enjoy a “magical” and intimate performance. As for the title of her latest album and upcoming tour, Katy revealed the inspiration behind the name “Prism” during her iHeartRadio listening party. “My head was in a dark place. I thought I was gonna make an acoustic record with depressive shades.” Instead, she said, “all the light hit me and influenced shades, I feel very prismatic.” We can’t wait to see how this translates into a new tattoo!