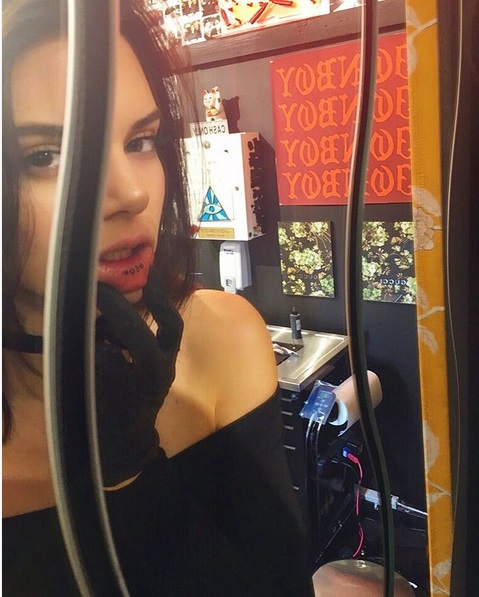 **Update: In a post titled “I Got a Face Tattoo!!” uploaded to her app in November 2016, Kendall revealed that she got her “meow” inner lip tattoo back in July, from JonBoy, and that the only reason she got the ink is so that she would be able to say that she has a tattoo on her face!

Kendall Jenner has kept it pretty mellow when it comes to getting tattoos, unlike her inked-up sister Kylie, but the model’s cheeky new tattoo inside her lip proves that she isn’t afraid to go under the needle for some new ink, no matter how painful it may be. Kendall Jenner’s new tattoo – the word “meow” inked on the inside of her lower lip – was first revealed by the model during a recent interview for Allure magazine’s October cover shoot, and on September 29, celebrity tattoo artist Jonathan “JonBoy” Valena uploaded a photo of the ink to his Instagram account, captioning the snap simply “meow.”

While speaking with Allure magazine about her slowly growing collection of tattoos, Kendall Jenner let it slip that she has a never-before-seen tat inked on the inside of her lip, which she revealed to photographer Patrick Demarchelier during the cover shoot. The tattoo, which reads “meow” in small black letters, was apparently inked a while back, and the model decided to keep the tattoo a secret. Sadly, lip tattoos are extremely prone to fading, and it is believed that when Kendall visited JonBoy’s tattoo shop in late September, it was to have him touch up the faded ink.

Unlike her younger sister Kylie, who has five tattoos and counting, Kendall Jenner has played it slow so far when getting tattoos, and the model has only three pieces so far, including the secret “meow” ink inside her lip. According to a blog Kendall posted on her website back in April, her other two tattoos are both done in white ink on her middle fingers. “The one on my right hand is a full heart to represent an angel and my left is a broken heart – kind of like the devil side.” Kendall’s broken heart tattoo was done as a matching piece with her best friend, Hailey Baldwin, who got the same tat in red ink.

Kendall Jenner has yet to explain the meaning behind her “meow” inner lip tattoo – she hasn’t even posted a photo of the ink on her own Instagram account, as far as we know – but there must be something with celebrities getting cat-related tattoos inside their lips. Remember the “sad kitty” tattoo Miley Cyrus had inked inside her lower lip back in 2014?? Explain please!