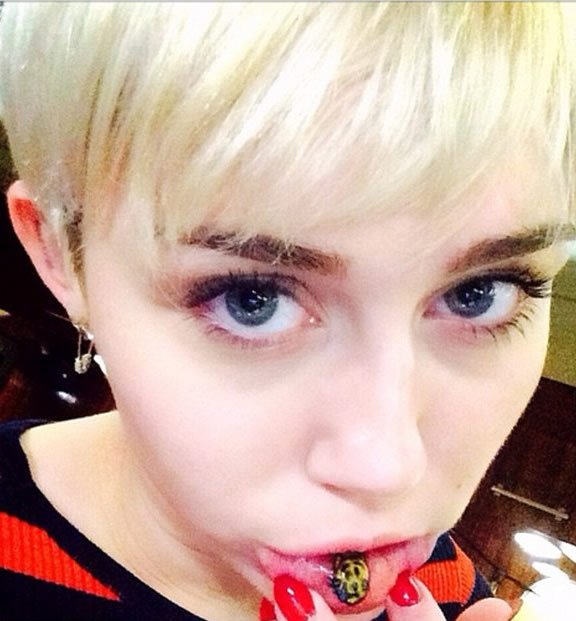 You’ve heard of the “grumpy cat,” right? Well now Miley Cyrus has introduced the world to the “sad kitty,” with a bizarre new tattoo of a crying cat inked on the inside of her bottom lip. Miley showed off her new tattoo on Instagram on March 14, 2014 (around the same time she was spotted rolling a “suspicious-looking cigarette,” mind you), and the new ink features a pretty weird image of a sad-looking black and yellow cat crying a single blue tear. Miley’s sad kitty tattoo is located on the inside of her bottom lip, and the only purpose for the tat, as far as we can tell, is that it will really add a new element of sass to Miley Cyrus’ sad-face pout from now on. ‘Cause she needs that, right?

The day Miley revealed her lip tattoo, she was inside a recording studio in Tulsa, Oklahoma with Flaming Lips frontman Wayne Coyne, and shortly after Miley debuted the new tat, Coyne posted a picture of the singer along with the caption: “Yup…Recordin with Miley…High as f***.” She certainly must have been to get that tattoo. High as f***, we mean. As far as an explanation goes for the brightly-colored tat, Miley Cyrus captioned the first Instagram photo of her “sad kitty” tattoo with a simple kitten emoticon, and then posted another close-up of the ink with the caption, “#sadkitty #f—kyeahtulsa @waynewontpostpicsofnakedwomen @katyweaver #lovemoneyparty #freakz.”

Miley seems pretty proud of her fresh sad kitty tattoo, and in the Instagram pics she posted online, you can see the pop star pulling down her bottom lip to show off the ink. We’re guessing Miley Cyrus’ tattoo inside her lip must have hurt something fierce though, since the 21-year-old posted a Twitpic of herself with a washcloth covering her face earlier in the day. She also tweeted the message: “my life right now thanks to

@waynecoyne @stevendrozd @katy_weaver #OUCHYBOOBOO.” Miley Cyrus is currently touring North America on her Bangerz tour, which kicked off last month, and the singer showed off her new sad kitty tattoo in Oklahoma, but we’re not sure if she actually got it there. The inspiration behind the ink, of course, comes from Miley’s “Wrecking Ball” performance at the 2013 American Music Awards, which included an adorable kitten crying on a giant screen behind her.

Unlike the majority of Miley Cyrus’ tattoos, which range from a large, intricate portrait tat of her grandmother on her forearm to a Theodore Roosevelt quote on her other arm, this small new sad kitty tat is only visible when the singer intentionally pulls down her lower lip or strikes a super pouty pose. Similar to Rihanna’s tattoo of the word “Shh…” on the side of her index finger – which works double duty when trying to quiet someone down – now when Miley is feeling extra sad, she can commiserate with her poor sad kitty. What do you guys think of Miley Cyrus’ new tattoo?