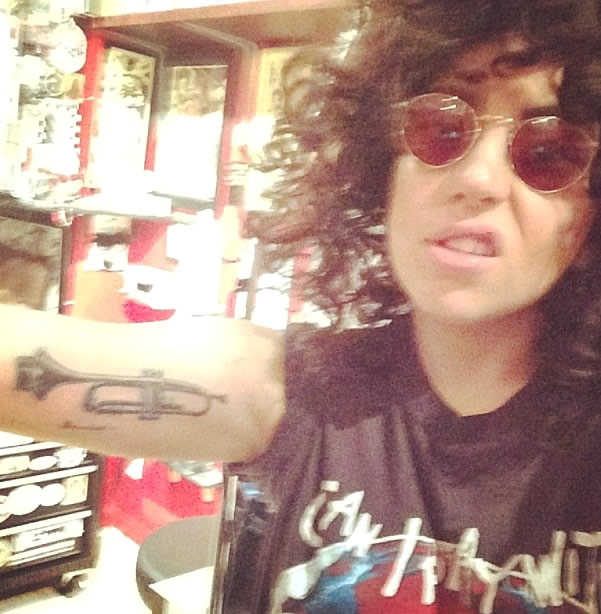 Lady Gaga has always loved Tony Bennett’s music, and Mother Monster decided to get a permanent tribute to the music legend this week, adding a large trumpet tattoo to the inside of her arm. Shortly after stepping out in a rocker chick ensemble and carrying a framed portrait of a trumpet drawing in New York City on June 18, Lady Gaga posted a photo on Instagram of her brand-new trumpet tattoo, writing, “…let’s go it’s jazz time world.” Lady Gaga’s tattoo, which marks number 15 for the inked-up pop star, features a black and white trumpet inked on the inside of her right bicep (in the same spot as the Rilke German tat on her left arm), with Tony Bennett’s birth name “Benedetto” written underneath it.

Lady Gaga wasn’t the only one who went under the needle in honor of Tony Bennett this week. Her buddy, jazz musician Brian Newman, got a matching trumpet tattoo in the same spot as Mother Monster, and the pop star posed with Newman in a shot she posted online and captioned: “Bennedetto. Tony’s an artist. He sketched this trumpet and were getting tattoos @brainnewmanny playing on the tony album and arranging music.” Lady Gaga’s tattoo was inked in New York by celebrity tattoo artist Becca Roach, better known by her nickname Bad News Becca, who is also responsible for Lady Gaga’s “Born This Way” unicorn tattoo on her upper thigh.

Lady Gaga has a deep appreciation for legendary jazz singer Tony Bennett, who was born Anthony Dominick Benedetto, and is also an accomplished painter with works on permanent public display in several institutions.

In fact, in 2011, Tony Bennett actually drew a charcoal nude of Lady Gaga that was auctioned on eBay for a whopping $30,000, and the proceeds of the sale benefited Bennett’s Exploring the Arts charity, as well as Gaga’s Born This Way Foundation. That same year, Gaga and Bennett recorded a version of “The Lady is a Tramp” for the music legend’s “Duets II” collection, and in 2013, the dynamic duo sang together at the White House Ball.

Tony Bennett and Lady Gaga joined forces yet again earlier this week, making a surprise appearance at New York City’s Frank Sinatra School of the Arts, which was founded by Mr. Bennett himself. Gaga and Bennett performed and hosted a master class at the school’s Tony Bennett Concert Hall, and the jazz legend shared a photo of the two online, along with the caption, “What a day with my great friend @ladygaga. The students went gaga for Gaga!!” Mother Monster shared the same photo, captioning the shot, “Our secrets out @itstonybennett Were in Love.” Judging by the pair’s obviously close relationship, it’s no wonder Lady Gaga drew inspiration for her new tattoo from a Tony Bennett original!

Side note: Lady Gaga goes against the promise she made to her father years ago that she would keep the right side of her body tattoo free! We wonder what Daddy Gaga will have to say about this!