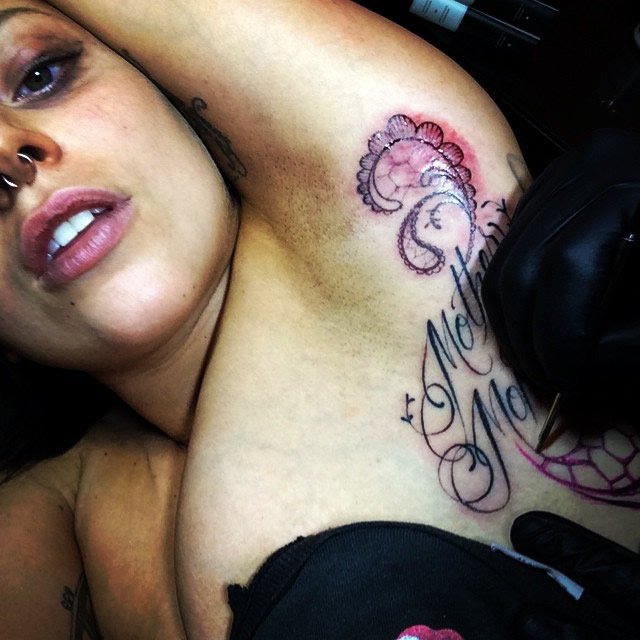 It’s been a whirlwind five years since Lady Gaga dropped The Fame Monster, a reissue of her debut studio album The Fame, on November 18, 2009, and the singer has inked a brand-new “Mother Monster” tattoo on her side/armpit to celebrate the anniversary. It was just over a month ago that Lady Gaga revealed the large monster paw tattoo tribute to her little monsters on her back, and now the inked-up pop star has gone under the needle again, this time for a ribcage tattoo reading “Mother Monster,” which is what her die-hard fans call the chart-topping performer. And, in true Lady Gaga style, the pop star shared a video on Instagram of her going under the needle, so that we could all join in on the experience too!

With chart-topping hits like “Telephone” and “Bad Romance,” Gaga’s The Fame album marked a huge success for the relatively unknown pop star, and cemented Gaga’s lifetime position as “Mother Monster” to her legion of little monsters. Now, thanks to her “Mother Monster” tattoo on her side, Lady Gaga has a permanent reminder of how adored she is by her fans. Lady Gaga’s tattoo was inked by tattoo artist Eric Gonzalez of Deer’s Eye Studio, while the singer preps for the final artRAVE: The ARTPOP Ball Tour stops in the UK. “Such an honor to be tattooing Lady Gaga again,” the artist wrote on his Instagram page. “Tattooing. Jameson. Friends. All while she’s working on a new song with the homies Tim Stewart and Rick Tillo. Priceless. Speechless.”

Lady Gaga’s tattoo was inked on November 18, on the upper part of her left side, and features the nickname “Mother Monster” in black, with a paisley design extending up into her armpit area. This isn’t the first time Lady Gaga has marked her body with a tribute to the bond between herself and her fans.

In addition to the monster paw tattoo on her back, the singer also has a tat on the inside of her right bicep that reads “Little Monsters,” and a “Rio” tat on her neck, which she got during a tour stop in Rio de Janeiro, and which was designed using handwriting samples from three of her fans. Staying true to her father’s wish that she only tat up one side of her body, Lady Gaga’s tattoo was inked on her left side – what she calls her Iggy Pop side.