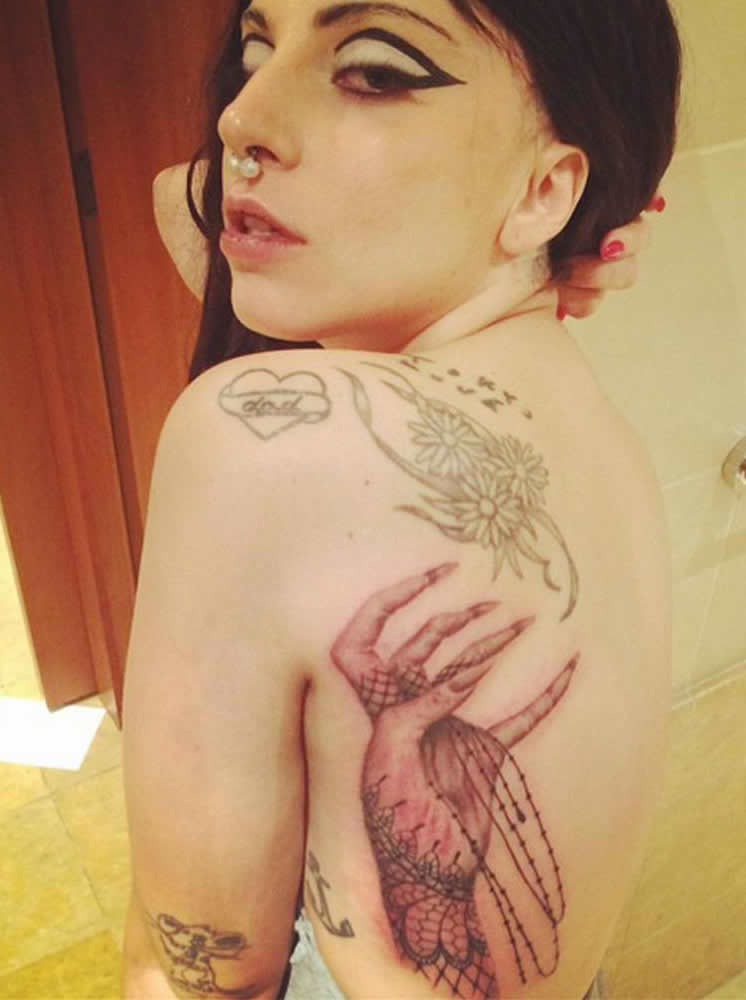 Among other things, Lady Gaga is known for her seemingly inexhaustible devotion to the fans she calls her “little monsters,” and on October 2, the pop star cemented this commitment with a “monster paw” tattoo tribute on her back. Lady Gaga’s tattoo is inked on the left side of her back/ribcage area, and features a rose-colored “monster” hand with scaly or lace-covered skin and some seriously scary fingernails. Apparently, Gaga has been planning this particular tattoo for a while, because in the first couple photos she posted on Instagram of the tattoo session in progress, she included the captions “Uh Oh…it’s time monsters,” followed by “Paws Up.”

Lady Gaga’s new tattoo was inked in Hamburg, Germany by tattoo artist Eric Gonzales of Deer’s Eye Studio, and even though the area of the tattoo is confined to her back, the singer spent the tattoo session in true Lady Gaga-style…wearing a wig, high heels and a gray backless dress that she pulled up at various points during the session to reveal her bare bottom and G-string. Gaga chose to get the tattoo inked in Germany, where she is currently performing the European leg of her ArtRave: The ARTPOP Ball world tour, and the “Paws Up” tattoo is apparently meant to represent the singer always wanting her fans to be proud of who they are and what they do.

Lady Gaga has her fair share of tattoos, including the Tony Bennet-inspired trumpet tat she debuted earlier this summer, but this new “monster paw” back tat is apparently the one she likes most. “My favorite tattoo is the one I got last night in Hambug,” Gaga revealed during a Reddit AMA question and answer session this week. “It’s the Monster Paw, the symbol of my fans as they have held their paws high in the crowd every night since we became a community. I cherish it for its meaning, the loyalty, devotion and strength we share. I wanted it engraved on me forever.”

Gaga must have flown Eric Gonzales in for a private tattoo session, since the artist is normally based in California, and obviously Gaga thought the ink was worth it. “Getting some very important ink from the great @Nspired1…it’s time #monster4life,” Lady Gaga captioned another photo of the monster paw tattoo session. This isn’t the first time Lady Gaga has gone under the needle to pay homage to her die-hard fans though – she also has the phrase “Little Monsters” inked on the inside of her left bicep – and we have a feeling it won’t be the last!