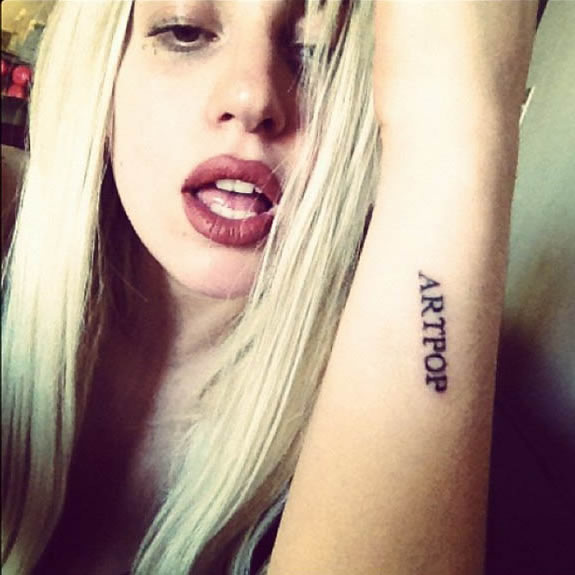 On August 3, 2012, Lady Gaga posted a pic of a new tattoo on her LittleMonsters social media site. Judging by the picture, Lady Gaga’s tattoo is inked on her left forearm and reads “ARTPOP,” which could a hint of her new album title. The pop queen announced earlier this year that she wouldn’t be unveiling the title of her new album until September, so it looks like we all got an early preview. Lady Gaga’s third studio album won’t be released until 2013, so we may just have to settle for enjoying the singer’s tattoo for now!

True to her mysterious ways, Lady Gaga got a tattoo on August 3, 2012, and hinted to fans that the ink could be the title of her upcoming album. Gaga’s tattoo reads “ARTPOP” in simple black letters, and is inked on the outside of her left forearm. Although at first glance it looks like the tat is inked on her right arm, the posted picture is a mirror-image, and the tat is actually on her left side, like all Gaga’s other tattoos. The pop queen posted the first pic of the ink on her LittleMonsters social media site, accompanied by the message “new ink new album.” Although Gaga announced previously that she would reveal the title of her third studio album in September 2012, it seems like the singer was just itching for some new ink.

Lady Gaga isn’t the only singer whose album title has been translated into body art, but she certainly has a unique way of debuting new tattoos as album title teasers. In 2011, the world was abuzz when Gaga was set to release her yet-to-be-named second studio album, and the pop queen gave everyone a little taste when she belted out the first few lines from the title track at the MTV Video Music Awards on September 12, 2011. The next day, Lady Gaga sported a unicorn tattoo on her thigh that featured the phrase “Born This Way.”

Nearly a year later, fans of the singer were busy speculating about the upcoming album title when news about a brand new Lady Gaga tattoo emerged online. Yes, Mother Monster did it again – another new album title tattoo! It seems like Lady Gaga enjoys inking album titles on her body, as do other stars like Justin Bieber, who recently got a “Believe” tattoo inked on his arm as a tribute to his most recent album. Keep in mind folks, Lady Gaga is only 26, and she is just getting started. There is lots of potential for many more tattoos in her future! 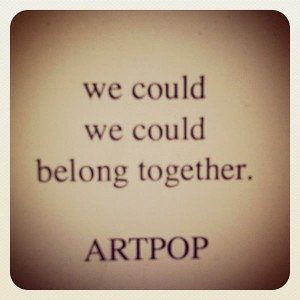 Lady Gaga’s “ARTPOP” tattoo was revealed while the pop queen was still on tour for the Born This Way Ball, and Mother Monster is doing plenty of promoting while up on stage. To concertgoers in Perth, Australia, Lady Gaga said, “Let’s just say I feel, I feel that when I wrote Born This Way, I demonstrated a sense of maturity. And I feel that, on the next album, there’s a lack of maturity, it’s a tremendous lack of maturity or sense of responsibility.” We like it! As Gaga said when asked in 2012 about the future of her music, “I just want to keep going. I’m not as goal-obsessed as I am process-obsessed. I just want to keep writing music. I’m looking forward to putting out another album and going on tour.” Writing music and performing isn’t just a task or responsibility for Gaga though. When asked about the inspiration for her ARTPOP album, she said, “I wake up in the morning with tears in my eyes and I write new songs. I think about the future and the next record and how I can make the stage more beautiful.” A new Lady Gaga tattoo seems like a good start!