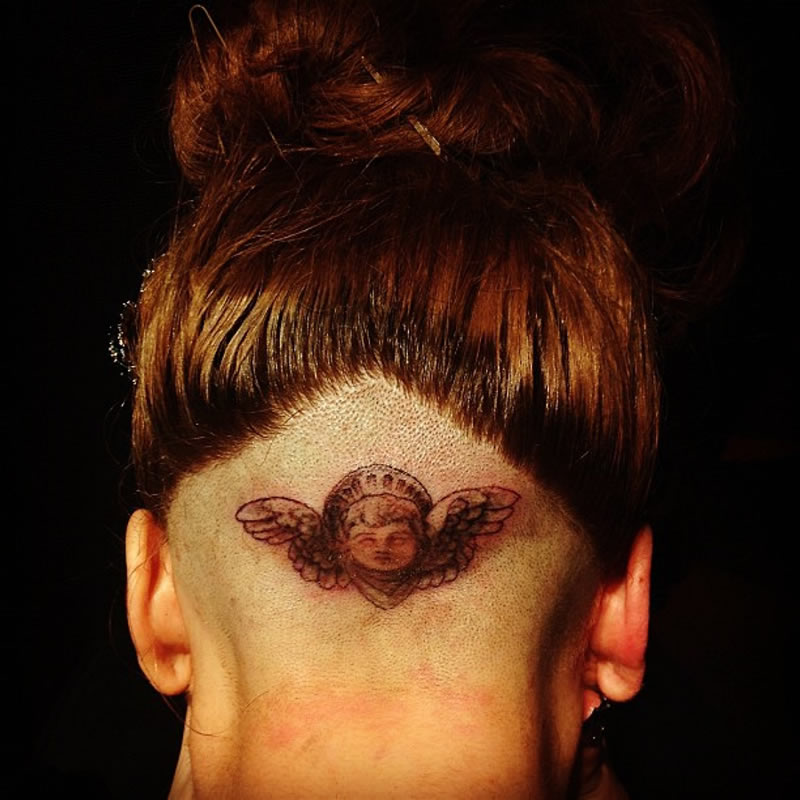 Just two weeks after debuting her side anchor tat as a tribute to boyfriend Taylor Kinney, Lady Gaga has gotten yet another tattoo in honor of a person close to her. This time though, Gaga didn’t just go to the tattoo parlor and then post the pic online like most other celebrities do – that just wouldn’t be interesting enough. No, the pop queen actually got inked during the launch of her new fragrance, FAME, offering onlookers and fans around the world a live look at the tattoo session she underwent as a tribute to her friend’s late mother. Read on to learn more about Lady Gaga’s neck tattoo!

September 13, 2012 was a big day for Lady Gaga. Not only did she launch her new fragrance, FAME, but also got a new tattoo inked on the back of her neck in what can only be described as Gaga-style. During the performance portion of the perfume launch – which took place at the Solomon R. Guggenheim Museum – the pop queen appeared inside a giant replica of her FAME perfume bottle, where onlookers could watch her putting on makeup and playing on an iPad while music blasted in the background. It wasn’t until Gaga stripped down to lingerie and a thong and removed her red wig that things got interesting. Don’t worry, there was no human-mermaid gyrating this time; but Lady Gaga did go under the needle and get a new tattoo!

Earlier in the week, Gaga debuted a brand-new hairstyle, having shaved a portion of the back of her head in honor of photographer Terry Richardson’s mother, who passed away on September 11. Lady Gaga and Richardson developed a personal and professional relationship back in 2010, and the singer obviously feels a strong connection to the man who spends a good deal of time documenting her life via photographs. Posting a picture of her shaved head on Twitter, Gaga wrote the following message to Richardson: “I did it for u Terry. I’m sorry about ure mommy. She has princess die, but were all princess high.” Well, wouldn’t you know that that little shaved triangle at the nape of her neck made for a perfect spot to get a new tattoo, and Gaga took advantage during the launch party, getting a small cherub angel inked in that very same spot. 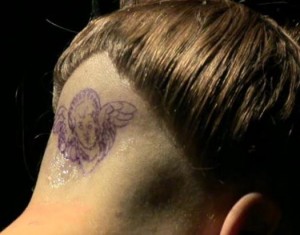 Lady Gaga’s neck tattoo features a small cherub angel with wings inked in black and white, with a crown similar to the Statue of Liberty’s atop its head. Since the angel found its home in the section of her head that Lady Gaga shaved for Richardson’s mom, we’re going to assume that it’s meant to be a guardian angel, a common type of tat inked in memory of someone who has passed away. Shaving her head in an act of solidarity and getting a tribute tat in honor of her friend’s mother who passed away gives us all a little glimpse of a softer side of Gaga, which we don’t often get to see from the exhibitionist performer. Lady Gaga laid down right there inside that giant perfume bottle in a thong and lingerie and got the angel permanently inked on her head while Kanye West’s “Mercy” played in the background. The whole event was called “Sleeping with Gaga,” and celebrity attendees included Paris Hilton, Marc Jacobs, Yoko Ono, Lindsay Lohan, Michael Strahan and Jason Wu.