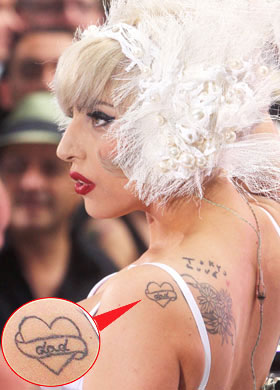 Lady Gaga, the self-professed daddy’s girl has given her dad something else to be proud of – a back tattoo in his honor! Gaga’s tattoo tribute to her dad was inked after her beloved father underwent emergency heart surgery in 2009 to save his life. He actually almost didn’t get the surgery, until something Lady Gaga said changed his mind. Read more and find out exactly how persuasive the pop star can be!

Lady Gaga’s seventh tattoo is a small black heart outline inked on her left shoulder with a banner that reads simply “dad.” The back tattoo is located just to the left of Lady Gaga’s flower tattoo, which is accompanied by the text “Tokyo Love.” The singer’s dad tat was inked in October 2009, and the tattoo session was recorded for the “Tattoo Film” shown at the Monster Ball: Theater in 2009-2010. Gaga’s tattoo honoring her father was inked after the superstar took two weeks off to care for him following emergency surgery, during which he had a valve replaced in his heart. “I’m gonna get a tattoo for him this week; I’m gonna get a heart that says, ‘dad’ in it,” Lady Gaga reportedly said.

The Meaning Behind the “Dad” Tat

Lady Gaga admits that she is 100% a daddy’s girl at heart, which is why she so readily agreed to her dad’s request that she keep the right half of her body tattoo-free. The pop queen obviously loves tattoos, but her dad, Joseph Germanotta, asked her to promise that she wouldn’t ink her body up with any more tattoos. In true Lady Gaga style, she met him halfway. “He asked that I remain, on one side, slightly normal. So I only have tattoos on my left side. I think he sees this as my Marilyn Monroe side, and he sees [my left side] as my Iggy Pop side.” 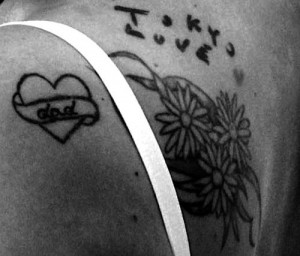 Wondering why Gaga chose the left side in particular to fulfill her dad’s request? Gaga says, “I’m also a leftie. It’s really my father – when I was a kid he tried to change my hands, and the doctor was like, ‘She was born that way, you can’t change it!’ So I think from a neurological standpoint, because I’m creatively driven by my left side, that’s why I chose it.” Hmm…born that way? Thank you doctor for a new album title! According to Gaga, her dad is also rather protective when it comes to her skimpy costumes on-stage (and in everyday life). “My father quite often is just like, ‘Can’t you just put on this,’” she said.

Back Tattoo Inspired by Gaga’s Dad

Lady Gaga is very close with her Italian family from New York, and when her dad had to have open-heart surgery, she told him she was going to get a tattoo in his honor. His response? “Well, you’re running out of real estate, so don’t get it too big.” Classic Daddy Gaga. Actually, when Gaga’s dad found out that he needed emergency heart surgery, he wasn’t going to go through with it at first. This upset his daughter so much that she told her dad if he died because he didn’t have the surgery, she would never love or write again. In fact, some say that this interaction was the inspiration behind the song “Speechless” off the singer’s The Fame Monster album. Needless to say, Lady Gaga’s dad got the surgery…and Lady Gaga got a tattoo!