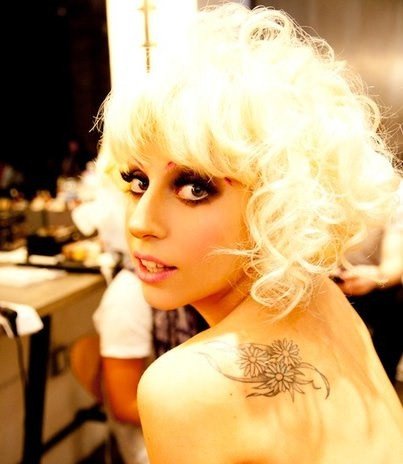 We know quite a bit about Lady Gaga’s tats, including at which tattoo parlor they were inked, on what date, and even the meanings behind her unique ink. However, there is one tattoo that remains slightly mysterious – the daisy tat on her shoulder. We know what year she got it and that she eventually added her Tokyo Love tattoo to it, but the tattoo meaning that most people are aware of seems far too simple. Do you know what inspired Lady Gaga to get her flower back tattoo?

Lady Gaga has a flower tattoo inked on her left shoulder, just to the right of her “dad” tattoo and below her “Tokyo Love” ink. The singer’s flower tattoo was the first ink she got in that area of her body, although there are now multiple tats in that same location. The cute flower tattoo includes three white daisies with vines reaching out from the flowers and extending almost onto her shoulder. Although Lady Gaga hasn’t spoken much about her daisy tattoo in public, it is believed that the pop queen got the ink in 2008, before she was the flamboyant pop star we know and love today. Later that same year, Lady Gaga visited celebrity tattoo artist Kat Von D and had her ink a rose tattoo on her hip and lower back to cover up her first-ever tattoo – a small black treble clef.

Lady Gaga loves white roses and daisies, which explains the reason behind the daisy tattoo on her back and the rose tattoo on her hip. Although the daisy ink was only the fourth tattoo she ever got, Lady Gaga has added many more pieces of body art to her collection since then. If you think the black and white daisy tat on Gaga’s back is just too simple for the flamboyant superstar, keep in mind that pretty much all of her tattoos are simple, if not subtle. Almost all of the Gaga’s tats are inked in black and white and, although some are pretty large, most feature relatively plain designs. If you watch Lady Gaga’s “Bad Romance” video, you can see both her flower tattoo and her “Tokyo Love” tattoo, although she hadn’t gotten the heart tat on her back in honor of her father yet. 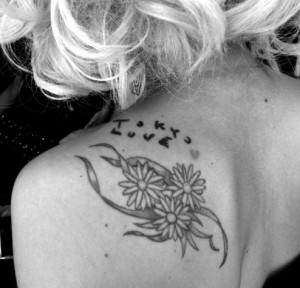 The Funny Thing About Lady Gaga’s Back Tat

Only true Lady Gaga fans would notice, but on the pop queen’s “Born This Way” album cover, you can see that Lady Gaga’s dad tattoo has been relocated! Instead of to the left of her flower tattoo, which is where it was inked in the first place, the heart with “dad” written inside of it has been moved below her flower tat in the photo. The reason behind this seemingly random move? We may never know.

One Response to: Lady Gaga’s Flowers Tattoo on Her Shoulder