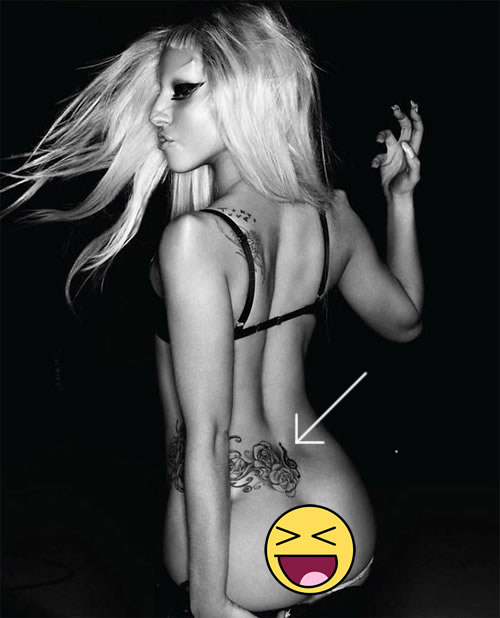 Although Lady Gaga’s peace tattoo on her wrist is the piece of body art that fans are probably most familiar with, the tribute to John Lennon wasn’t the singer’s first tat. At 17, Lady Gaga used a fake ID to get some ink on her back without her parents knowing. Later on, she decided it wasn’t something she wanted to keep, and she has since had it covered up with her rose back tattoo. Do you know what the first tattoo was that Lady Gaga ever got? Read on to find out!

Lady Gaga is most well-known for her outrageous costumes, her exhibitionist personality, and her growing collection of body tattoos. The singer has a number of tattoos all over her body, which fans can easily see thanks to her affinity for revealing costumes. However, even some of Gaga’s biggest fans are unaware of the fact that the pop queen’s first tattoo wasn’t the peace sign she sports on her left wrist in honor of John Lennon. In 2003, at age 17, Lady Gaga got her hands on a fake ID and had a small black treble clef inked in the middle of her lower back. Five years later, Lady Gaga decided the treble clef tattoo wasn’t something she wanted to keep, and had it covered up with her rose tattoo, inked by the one and only Kat Von D.

Why did she get the treble clef and then cover it up? Well, it’s not difficult to decipher the meaning of the singer’s first tat when you consider how passionately she has devoted herself to music in the past few years. For the majority of her life actually. Back when Lady Gaga was more like a Baby Gaga, she used to go around singing into her little plastic tape recorder, keeping tune to music greats like Michael Jackson and Cyndi Lauper. She has also named David Bowie, Madonna and Queen as big influences in her life and music career. So why did Lady Gaga decide to cover up a tattoo that represented one of the most important parts of her life? She has somehow managed to keep the reason for her tattoo cover-up under wraps, but we think she wanted to complete the transformation from Stefani Germanotta to Lady Gaga.

The Story Behind Gaga’s Tattoo Cover Up 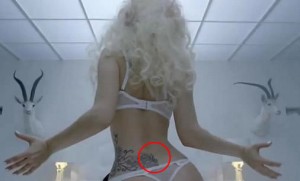 When Lady Gaga was 17 and still known by her given name, Stefani Joanne Angelina Germanotta, she got her first tattoo with a fake ID – a treble clef. In 2008, when she decided to cover it up with a rose tattoo inked by celebrity tattoo artist Kat Von D, the two discussed the singer’s tats and her future in the music biz. In reference to Gaga’s very Italian New York family, Kat asked, “They like your tattoos?” Gaga’s reply: “When I got the first one [the treble clef tattoo] they had a heart attack.” She continued, “Then I had a heart attack because I felt bad for not telling them I was going to do it. We’re really close.”

Lady Gaga’s Rise to the Top 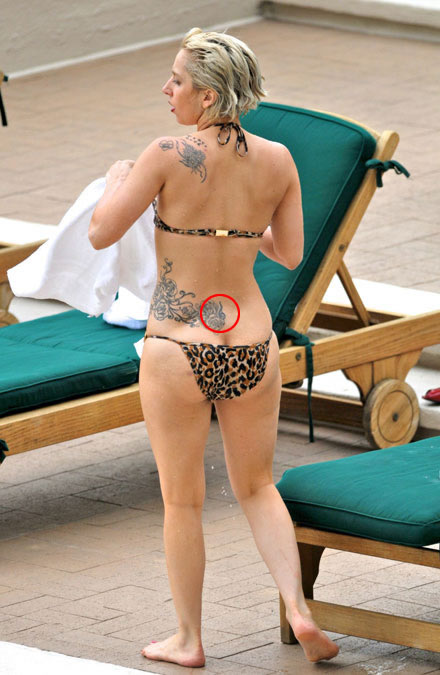 When the superstar that the world now knows as Lady Gaga was just a little girl, the precocious child would dance around the table at fancy restaurants using bread sticks as batons. Based on the fact that Gaga also used to innocently greet new babysitters at the door in her birthday suit, it’s not difficult to imagine how she became the exhibitionist, singer/songwriter with a flair for dramatic theatrics that she is today. Lady Gaga’s back tattoo featuring the treble clef was a tribute to her love for music, but now she lives that passion every day; she doesn’t need a tattoo to remember how much it means to her. Before Lady Gaga really made it big, there was fear about her being too “racy,” “dance-oriented,” and “underground” for the mainstream media. What did Lady Gaga have to say about that? “My name is Lady Gaga, I’ve been on the music scene for years, and I’m telling you, this is what’s next.”

One Response to: Lady Gaga’s Treble Clef Tattoo on Her Lower Back