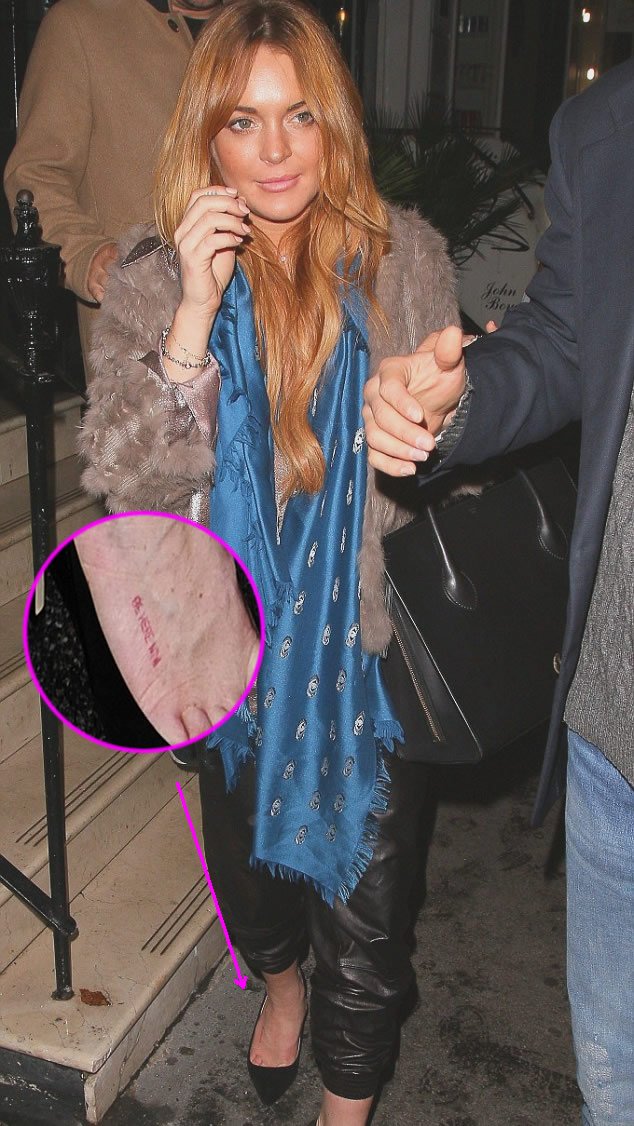 While stepping out for a dinner date with pals in London last week, Lindsay Lohan inadvertently showed off a new tattoo on the side of her foot that reads “Be Here Now.” Lindsay Lohan is no stranger to tattoos, and the actress has quite a few small pieces scattered across her body, including a “Shhh….” tattoo inked on her finger, a red triangle tattoo on her bicep, Billy Joel lyrics inked on her ribcage, and a Marilyn Monroe quote on her forearm. Staying true to her love of quote tattoos, the “Be Here Now” phrase featured in Lindsay’s foot tattoo is actually the title of the band Osasis’ 1997 album. But is that what it truly represents??

Lindsay was headed to the hip London restaurant Nozomi on October 9, when she was photographed by paparazzi, and she was wearing a grey fur coat over a sparkly top and a pair of black cuffed leather pants at the time. She completed the look with a bright blue scarf that complemented her red locks perfectly, and a pair of black pumps, which showed off the new quote tattoo on her right foot. It’s true that Lindsay Lohan’s tattoo matches the title of the 1997 Oasis album, but it’s likely that the ink was meant not as a direct tribute to the band, but instead as an philosophical or inspirational message, much like her other tattoos.

Truth be told, Lindsay Lohan has had a troubled (and highly publicized) past, and her foot tattoo could simply be a reminder to herself to live in the moment and not worry about what other people are saying or thinking about her all the time. Lindsay has taken this route with many of her other tattoos, which she seems to be very proud of. For example, back in 2009, Lindsay added a Marilyn Monroe quote to her arm that reads, “Everyone’s a star and deserves the right to twinkle.” Two years later, she got a tattoo of Billy Joel lyrics inked on her ribcage, which read, “Clear as a crystal sharp as a knife, I feel like I’m in the prime of my life.”

Back in May, Lindsay Lohan shared snapshots of herself on Twitter basking in the sun at the Cannes Film festival, along with the caption: “good morning #Cannes2014 Overwhelming here to say the least! We all NEED #MEDITATION & to BE HERE NOW.” With a starring role in the West End production of David Mamet’s “Speed-The-Plow,” and an unexpected appearance at the 60th annual Women of the Year Lunch & Awards this week, the actress appears to be turning over a new leaf, and her new foot tattoo is proof that she plans to take full advantage of living in the moment!