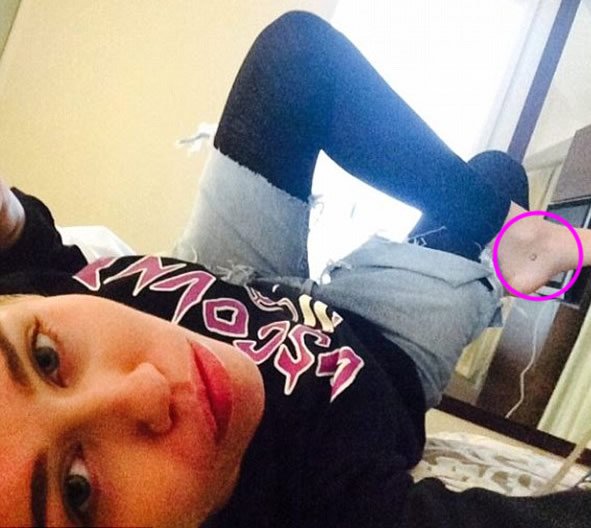 **Update: Miley managed to keep her mystery ankle tattoo under wraps for months, but she finally showed it off in an Instagram post on October 13, 2014. The friendship tat she got with Cheyne Thomas is a small black smiley face tattoo inked on the inside of her left ankle.

Miley Cyrus and her assistant and BFF Cheyne Thomas practiced the art of tattooing over the weekend, turning the tattoo gun on one another for a pair of friendship tats on their ankles. Miley is currently relaxing at home before beginning the next leg of her Bangerz World Tour on August 1, but she is obviously not taking a break from getting inked, debuting this latest ankle tattoo just a few weeks after getting a tattoo tribute to her deceased dog Floyd inked on her side during July 4th weekend. Miley has yet to reveal the design of her new ankle tattoo, but we’re guessing it matches the simple black smiley face tat she inked on the inside of Cheyne’s ankle.

Miley posted a photo on Instagram of the tattoo session, in which you can see the singer wearing a pair of black latext gloves and holding a tattoo gun to the inside of Cheyne’s left ankle. She captioned the photo “BIEW,” which is her nickname for Cheyne, who previously worked at a Starbucks before being hired as the pop star’s assistant. In another snap posted on Miley’s Instagram page on July 27, Cheyne is showing off the simple smiley face ankle tat, which we’re guessing matches her new ankle tat?? A third photo shows Miley leaning back on a table while Cheyne returns the favor and tattoos the inside of her left ankle.

It may seem surprising at first that Miley Cyrus is close enough with her assistant to get matching friendship tattoos, but the two are obviously the best of friends. They were spotted cozying up to one another in Vegas last December, and they have even gone skydiving together!

It’s also fitting that Miley would choose a smiley face for tattoo number 26, considering the fact that her now-infamous name derives from the nickname “Smiley” her father gave her as a child (later shortened to “Miley”), and the fact that her die-hard fans call themselves “Smilers.” A smiley face tattoo is also the perfect way to balance out the “sad kitty” tattoo Miley has inked on the inside of her lower lip.

This isn’t the first time Miley Cyrus has gotten a matching tattoo with a male friend/significant other. When Miley got her Floyd “With a Little Help from my Fwends” ribcage tattoo during Fourth of July weekend, her bestie and Flaming Lips frontman Wayne Coyne went under the needle for the exact same tattoo. The inked-up pop star also sports a tiny sugar skull tattoo on the inside of her right ankle, which matches the sugar skull tat former fiancée Liam Hemsworth has inked in the exact same spot on his ankle. Miley must have some serious faith in her friendships/relationships if she gets them immortalized in permanent tattoos!