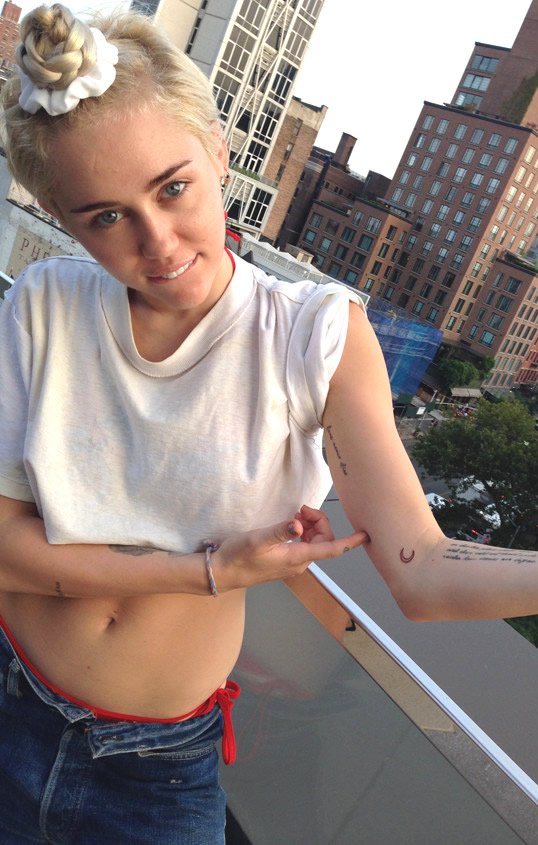 Miley Cyrus spent some quality time with friends in the Big Apple this week, during the North American leg of her Bangerz World Tour, and the singer took some time off from performing for her millions of fans to get two brand-new tattoos on her arms! The 21-year-old commissioned Keith “Bang Bang” McCurdy, the celebrity tattoo artist responsible for most of Miley Cyrus’ tattoos, to do her new ink, which includes a tattoo done in black capital letters on her right forearm reading “Love Yer Brain,” and a small crescent moon inked on her left arm, near her inner elbow.

Miley reportedly received a personal visit from Bang Bang while hanging out with friends in New York City on August 5, and told him exactly what she wanted for her two new arm tattoos. The first one, her “Love Yer Brain” arm tat, was reportedly inspired by her favorite band, The Flaming Lips. “Love Yer Brain” is the title track from The Flaming Lips’ 1987 album Oh My Gawd, and, according to Bang Bang, “It’s really just about advice about taking care of yourself and taking care of your temple.”

This isn’t the only time Miley Cyrus has gotten a tattoo inspired by The Flaming Lips. Just last month, Miley went under the needle with best friend and Flaming Lips frontman Wayne Coyne for matching tattoos of Miley’s late dog Floyd featuring the phrase “With a little help from my fwends,” which is the title of the band’s fourteenth studio album. “She knew exactly where it was going to go,” Bang Bang said about Miley’s “Love Yer Brain” tattoo. “She wanted real thin lines, almost like handwriting, but sloppy, not super-neat. She has a bunch of tattoos, and has tried to get that thin clean line. So the font we found is actually called the ‘Skinny.’”

Bang Bang gave us all the skinny on Miley’s other new tattoo as well, which features a small crescent moon inked on the inside of the singer’s left arm, near her elbow. The crescent moon tat is outlined in black and is a refreshingly simple and clean design, compared to some of Miley’s other more complicated tattoos, like the portrait tattoo of her grandmother she has inked on her arm. Miley hasn’t shared any deep personal meaning behind her crescent moon tattoo, but in a close-up pic of the ink she posted on Instagram, she called it “random,” so we’re guessing she just liked the design.

“She’s awesome,” Bang Bang said about Miley. “She’s down-to-earth. She’s so cool.” Bang Bang is obviously a fan of Miley Cyrus and her tattoo designs, because he allowed the pop star to turn the tattoo gun on him and ink the very same crescent moon tattoo on his thumb. Miley posted an Instagram pic of herself and Bang Bang, post-tattoo session, along with the caption: “BFF tats with @bangbangnyc.” Bang Bang’s tat isn’t nearly as cute as Miley’s crescent moon tattoo, but judging by the signature “Miley” tongue-sticking-out face Bang Bang is throwing in the Instagram pic, the man’s a big fan.