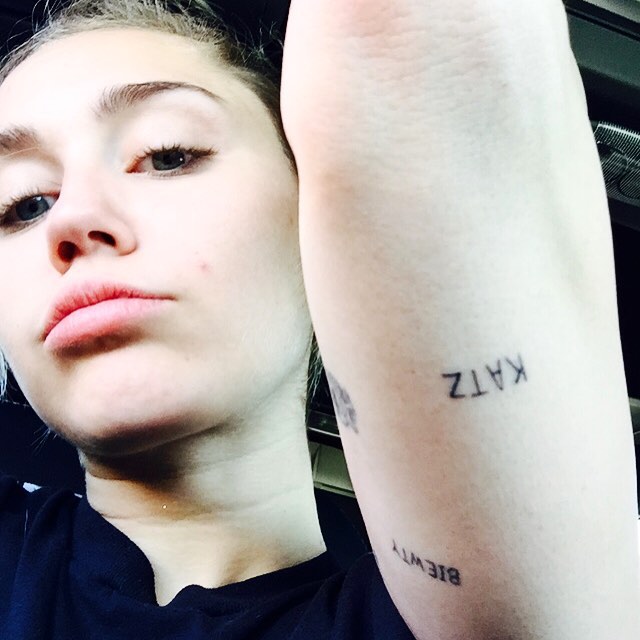 **Update: The mysterious tattoo on Miley’s arm is the word “OKIE” done in red ink.

Just two months after debuting her odd, but very Miley-like, avocado tattoo on her left arm, Miley Cyrus has already gone under the needle for two new tattoos, both on her arms – one, a tattoo on the back of her left arm that says “KATZ,” and the other, an unknown piece on the outside of her right arm that we have yet to get a good glimpse of. Gone are the days of Miley Cyrus tattoos that are larger, more intricate, and ultimately more attractive, like the portrait of her grandmother she had inked back in 2013; the singer is now firmly in the same camp as Harry Styles, adding tiny, random tattoos to her collection on what seems like a daily basis.

Miley Cyrus put her two new arm tattoos on display in an Instagram post from last week, in which she’s wearing a colorful kitten “check meowt” back pack and a pink hair scrunchie on her wrist. In the photo, you can see both of Miley Cyrus’ tattoos, including her “KATZ” tattoo, which is inked in black capital letters on the back of her left arm and the other mysterious tat on the side of her right arm, near her crossed arrows friendship tattoo. We aren’t sure yet what this other Miley Cyrus tattoo actually looks like, but it joins a number of the singer’s other tiny tats on her arms, including a tooth, a portrait of her dead fish, a crescent moon and the head of a cat.

For those of you wondering about the meaning behind Miley’s “KATZ” tattoo, look no further than the singer’s bestie and the girlfriend of Flaming Lips frontman Wayne Coyne, Katy Weaver. In another Instagram post from last week, in which Miley and Katy look to be trying out some new Halloween costumes (but could just be hanging out together on a typical day, really), Miley is wearing a T-shirt with two best friends holding hands and the names “MEOWTZ” and “KATZ” written above them. In the same photo, Katy Weaver is sporting a tattoo on her wrist that says “MEOWTZ,” which is presumably her own pet nickname for Miley Cyrus. 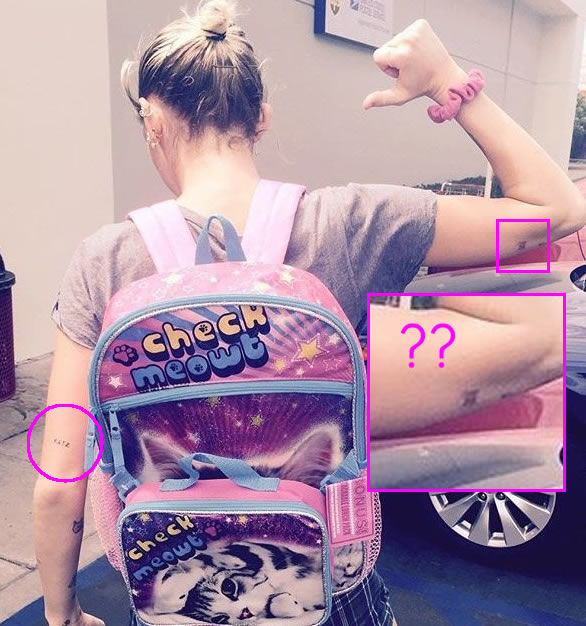 This isn’t the first time Miley Cyrus has gone under the needle in honor of a close friend or family member. Miley’s “KATZ” tattoo looks just like the “BIEWTY” tat she had inked in honor of her BFF and personal assistant, Cheyne Thomas, on her arm back in March, which is fitting, since Katy and Cheyne are also good friends, and the singer also rocks a similar “WUKONG” tattoo on her left wrist, which is her pet nickname for her younger brother, Braison. In fact, one of Miley Cyrus’ first tattoos was the large dreamcatcher she has inked on her side, which features a feather for each of her siblings.

Stay tuned to find out the meaning behind Miley Cyrus’ other new arm tattoo, and keep up-to-date on all of the pop star’s new ink!