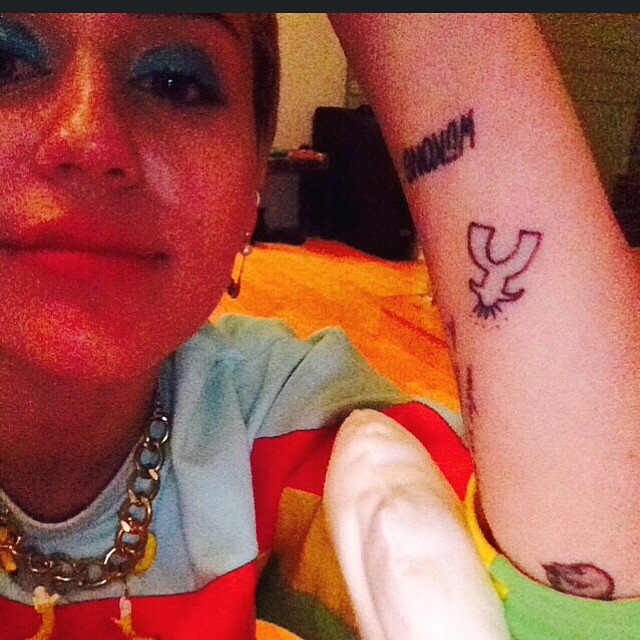 Is it just us, or does Miley Cyrus seem to be following in the footsteps of Harry Styles and Louis Tomlinson lately with her seemingly random little doodle tattoos? The pop star, who has been adding new tats to her collection bit by bit recently, showed off a brand-new arm tattoo this week featuring an outline of a mini robot. Miley Cyrus took to Instagram on October 29 to debut her new robot arm tattoo, which her BFF Wayne Coyne and his girlfriend, Katy Weaver, also had inked that same day. Curious why Miley opted for matching robot tats with the Flaming Lips frontman? Turns out, it’s a tribute to the band’s epic 2002 album, Yoshimi Battles the Pink Robots, which was apparently made into a Broadway musical in 2007.

Miley’s new robot tattoo is located on her left forearm, in between her “Wukong” tattoo dedicated to her brother, Braison, and the Theodore Roosevelt quote tat she had inked back in July 2012, and was inked during some kind of impromptu tattoo party on October 29. The story behind Miley Cyrus’ tattoo is an easy one. It is a miniature version of the giant pink robot featured on the cover of The Flaming Lips’ 2002 album-turned-musical Yoshimi Battles the Pink Robots. In case you’re wondering about the significance of the robot, Wayne had this to say about the musical plot:

There’s the real world and then there’s this fantastical world. This girl, the Yoshimi character, is dying of cancer. And these two guys are battling to come visit her in the hospital. And as one of the boyfriends envisions trying to save the girl, he enters this other dimension where Yoshimi is this Japanese warrior and the pink robots are an incarnation of her disease. It’s almost like the disease has to win in order for her soul to survive. Or something like that.

In one Instagram photo Miley posted online of her new arm tattoo, she included the caption, “Yoshimi battles the pink robots,” and in another she wrote, “bestie yoshi tatz.” Wayne Coyne also got a foot tattoo during the same session, opting for a smiley face with Miley’s initials “MC” in place of the eyes.

This isn’t the first time Miley Cyrus has gotten a friendship tattoo dedicated to her BFF, Wayne Coyne. Back in July, the two singers got matching tattoos on their sides featuring an image of Miley’s late dog, Floyd, and the phrase “With a Little Help From My Fwends,” which is the title of the 14th studio album by The Flaming Lips. Just one month later, Miley got a tattoo on her forearm reading “Love Yer Brain,” which is the title track off The Flaming Lips’ 1987 album Oh My Gawd. With her new robot tattoo tribute to The Flaming Lips’ Yoshimi Battles the Pink Robots, it appears that Miley is systematically covering her body with references to the rock band’s old albums. ‘Cause, why not?