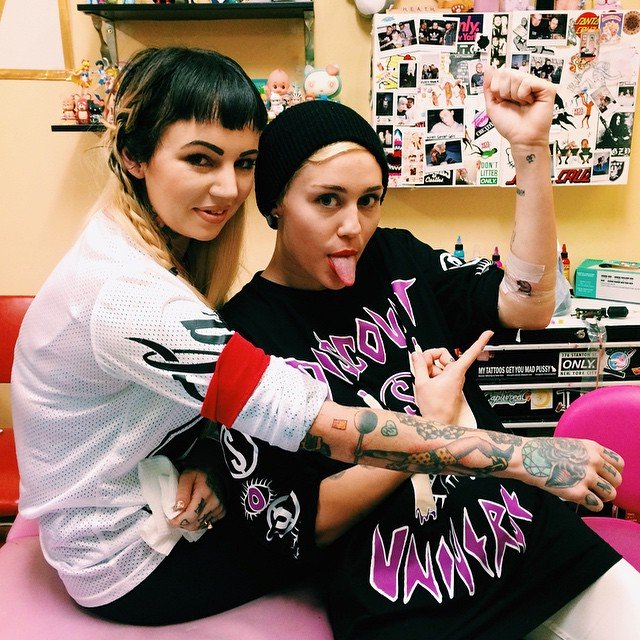 **Update: The mysterious tattoo Miley got along with the alien on her finger is inked on the inside of her left forearm, and the design turns out to be the face of a cat inked in gray.

Less than a week after getting her brother Braison’s nickname “Wukong” inked on her arm, Miley Cyrus hit up another Aussie tattoo shop for several new pieces, tapping artist Lauren Winzer of Hunter & Fox Tattoo in Alexandria for this work. In addition to getting a new tattoo of a cute little alien face inked on her finger, Miley also decided to add a little extra flair to three other finger tattoos that she already had, including her all-seeing eye, heart and inverted triangle tats. Miley’s little brother Braison is touring with the singer during the Australian leg of her Bangerz world tour, and it appears the two siblings may be going tat for tat as they explore the world down under.

Miley has quite a few finger tattoos, some of which she considers “ratchet,” and on October 14, the singer finally decided to update these tired old tats. She added some white and light blue color to her tattoo of the all-seeing eye on her index finger, some colorful sparkle to her heart pinky tattoo and completely changed her inverted triangle tattoo on her middle finger into a red and green slice of watermelon, all courtesy of Lauren Winzer. Miley posted a pic of her new/updated finger tattoos on Instagram on October 14, along with the caption, “So fresh and so clean clean RAD @laurenwinzer fixed up my ratchtatz.” 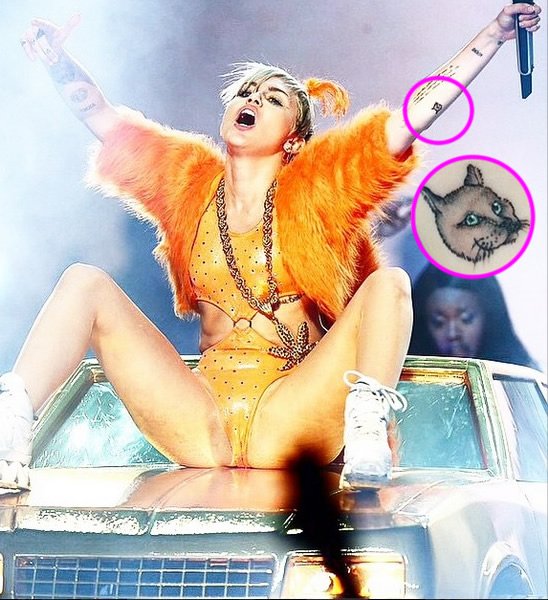 During the same tattoo session on October 14, Miley also added a brand-new tattoo to the ring finger of her right hand featuring a cute little alien face inked in black and white. Miley is apprently in an alien kind of mood these days, judging by the racy pic she posted to Instagram last week of herself sunbathing topless and two creepy alien heads covering her breasts. She didn’t stop at the finger tattoos though. According to another photo Miley posted on Instagram of her posing with the Hound & Fox tattoo artist, the pop star opted for a new arm tattoo as well, although the ink was covered up by a bandage in the photo. 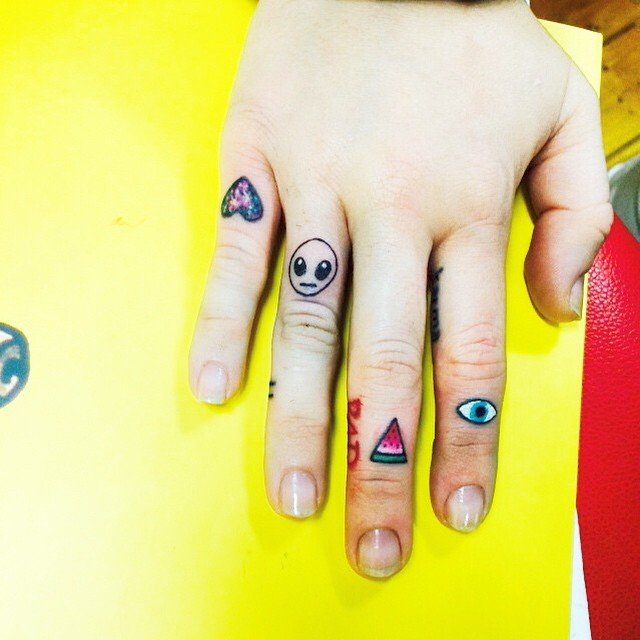 To finish off the epic tattoo session in true Miley style, the singer turned the needle on the tattoo artist herself, adding a new piece to Lauren Winzer’s already impressive collection of ink. Lauren shared a pic of her new Miley Cyrus tattoo on Instagram, captioning the photo: “Tattie swap with the realist pineapple in the game @mileycyrus.” Funny that Lauren mentioned a “pineapple,” since that is exactly what the tattoo artist inked on Miley’s assistant Cheyne Thomas just one day prior. Perhaps a new pineapple tattoo is what Miley added to her arm?? Stay tuned to find out!