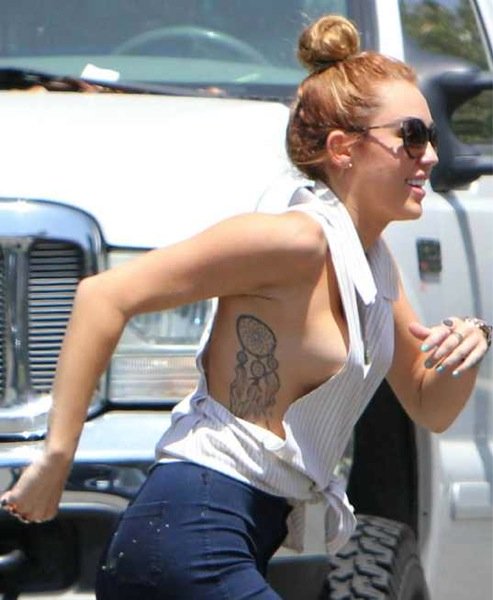 Did you know that Miley Cyrus is part Cherokee? Well she is, and she even has a tattoo inked on her side in honor of her heritage, however far removed it may be. It’s not only her Cherokee background that Miley’s ribcage tat celebrates though. According to Miley’s friends (since she rarely talks in public about her own tattoos for some reason), the pop star’s side tattoo is a Native American symbol meant to represent and protect her four siblings. Find out more about how Miley honored her two sisters and two brothers with a tattoo on her ribcage!

Miley Cyrus kicked off 2011 with a new tattoo inked on her right side, just under her armpit. Miley Cyrus’ side tattoo features a large Native American dreamcatcher, which she got inked on her body in February 2011, while in Venezuela. Miley’s fifth tattoo and also one of her largest, the dreamcatcher is a symbol that is thought to change a person’s bad dreams as they are sleeping. The dreamcatcher tat is pretty large and is inked in black and white with four feathers extending down from the main part of the dream catcher. Each of the feathers has some blue-colored bead detailing. Prior to getting the new ink, Miley was often seen wearing dreamcatcher necklaces on numerous occasions. She must have decided she may as well get it inked as a permanent accessory!

In April 2011, Miley posted a photo on Twitter declaring, “Rocking piggy tails for the first time since like 6th grade! I love summer time :)” While there were, in fact, “piggy tails” in the photo, there was also a large dream catcher tattoo on Miley Cyrus’ side, which was really the focus of the picture. Although Miley Cyrus’ dreamcatcher tattoo was captured by a number of paparazzi pics back in February when she first got the tat, the Twitter picture was the first clear glimpse of the large side tattoo. Other pictures of the singer’s tattoos have shown Miley at a juice bar in Toluca Lake, Los Angeles, wearing a revealing white tank top, which showed almost all of the singer’s dreamcatcher tat. Perhaps the most controversial picture of Miley Cyrus’ body tattoo though was the one that surfaced online in May of last year, in which Miley is getting her dreamcatcher tattoo inked on her side in Venezuela. In the photo, the teen star is laying down on a blanket with a tattoo artist working on her side tattoo…and she’s topless.

As a friend of Miley’s said about the dreamcatcher tattoo, “It’s a picture of the dream catcher that hangs over her bed with four feathers to represent her four brothers and sisters. The dream catcher is to protect them.” Traditionally, dreamcatchers are a Native American symbol of unity, a sacred handmade object created with a woven net wound around a wooden hoop. Dreamcatchers originated in the Sioux Nation, where it was believed that the dreamcatcher would only allow good dreams to filter through and reach the sleeper. Dreamcatchers were hung above the beds of children where they could catch bad dreams that would then disappear with the light of day. Good dreams would pass through and slide down the feathers to the sleeping child.

Miley’s siblings are Brandi (sister), 23, Trace (brother), 21, Braison (brother), 16, and Noah (sister), 11, which puts Miley smack dab in the middle of the five children. Apparently Miley is part Cherokee, and her dreamcatcher tattoo must have been an attempt to channel her inner Native American. According to Miley’s friend, “All of Miley’s tattoos have a deep meaning to her. They all represent family and friends close to her.” We can see this common thread throughout most of Miley Cyrus’ tattoos, including the heart inked on her pinky, the “love” inked inside her ear, the dream catcher tat, and the “Just Breathe” tattoo inked in memory of Miley’s two grandfathers and friend Vanessa, all of whom passed away from lung-related illnesses. 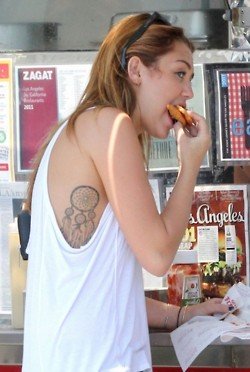 Because Miley Cyrus has been viewed for so long as a role model for teenage girls, due mostly to her role on the Disney show “Hannah Montana,” many Miley Cyrus fans and foes are outraged about the star’s numerous tattoos. Other actions of Miley’s that have been displayed publicly, including a video of her smoking a bong that was posted online in December, have led to significant criticism from the public about her choices. When Miley got the large dreamcatcher inked on her side, many people were wondering when the star would stop inking up her body. Miley isn’t alone in her tattoo fetish though; both Miley’s mom and dad have numerous tattoos of their own, as does Miley’s half-brother, Trace. Tish, Miley’s mom, has a large angel wings tattoo on her back and flowers on her abdomen. Billy Ray Cyrus has a small black heart inked on his left hand, which matches Miley Cyrus’ heart tattoo, as well as a full sleeve tattoo on his right arm and a Native American portrait on his left arm.