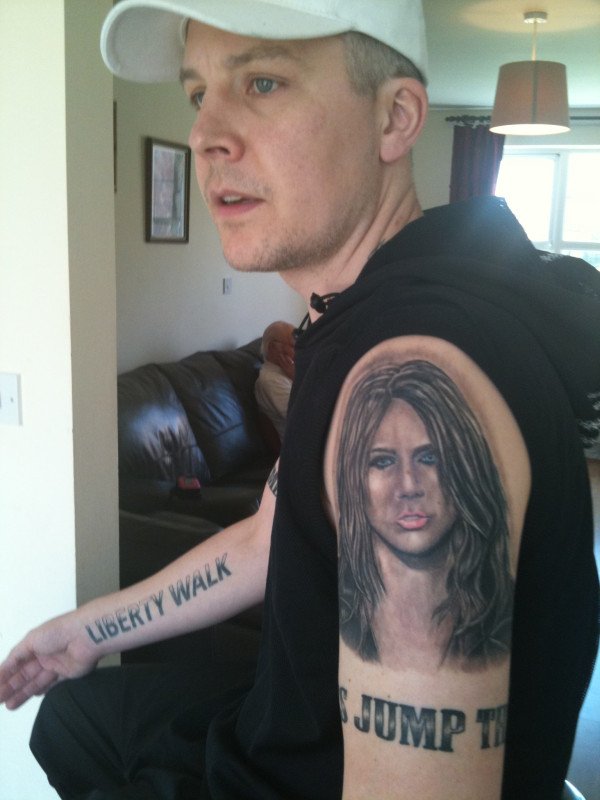 Have you heard the one about the guy with the Miley Cyrus tattoos? So, a grown man walks into a tattoo parlor and says I want tattoos of Miley Cyrus inked all over my body. Oh wait…that’s not a joke, it actually happened in real life. This guy made the conscious decision to get 15 tattoos of the pop star inked on his hands, arms, chest, and who knows where else, and it seems like he’s pretty proud of the tats. No, we’re not lying…check it out!

You’ve probably seen a tattoo of Miley Cyrus’ face, one of her name, one of her signature, and one of a song title of hers, but you’ve probably never seen them all on one body; and on a grown man’s body no less! This guy from Bridlington, England seems to have dedicated his body to proving that he is the pop star’s number one fan, and with 15 or so Miley Cyrus tattoos scattered across his body, this dude probably doesn’t have any competition. Although the singer may not be a fan of this guy’s very public display of affection, Miley Cyrus certainly doesn’t have anything against tattoos. Miley Cyrus’ own tattoos include a dreamcatcher tattoo on her side, several finger tats, “Love” inked inside her ear, and “Love Never Dies” and a Roman numeral tattoo on her arms.

Let’s start with the tattoo of Miley’s name on his collarbone, because that’s probably the least creepy tattoo of the pop queen that he has. In addition to that tat though, this 40-year-old also has a tattoo of Miley’s signature on both of his hands, song titles “Obsessed,” “Liberty Walk,” and “Breakout” inked on his forearms, and a portrait Miley Cyrus tattoo on his left shoulder. But that’s not all; he has over half a dozen other tattoos inspired by the singer, and rumor has it he is already planning his next tattoo of Miley Cyrus. 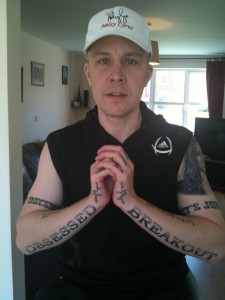 The man who calls himself “MileyCyrusCarl” has devoted his entire Twitter profile to Miley Cyrus, flooding the web with pictures of his Miley-inspired tattoos or pics of the singer herself, dating back to her as a toddler. And when he’s not posting pictures of Miley Cyrus, he’s writing things like, “Miley Cyrus u are a Miracle,” and “I love u so much x nobody is more beautiful & talented & sexy as u. I have 15 tattoos of u! There’s an Angel in LA xxxx.” He has also reportedly sent tweets to Miley, to which she has yet to respond. Well, that’s not creepy at all. If we didn’t know any better, we would say this dude is “Obsessed!” 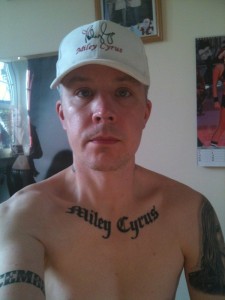