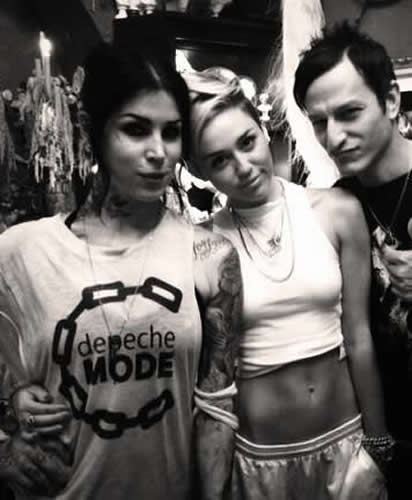 Miley Cyrus got a new tattoo on Sunday, August 4, but the singer has remained uncharacteristically tight-lipped about what her latest ink looks like. The first hint about a new Miley Cyrus tattoo came when Kat Von D posted the simple message “Tattoo-time” online, along with a close-up image of what looks like an ink stain, and Miley re-tweeted the post for all her fans to see. Miley hasn’t revealed yet what her new tattoo is, or where it is inked on her body, so be sure to check back with us to find out as soon as she finally lets it slip. Usually when Miley gets inked, she can’t wait to show off her new tattoo, so we’re just waiting until the pop star can’t stand keeping it a secret anymore!

Some inked-up celebrities like Rihanna are devoted to Keith “Bang Bang” McCurdy, but when it comes to tattoos, Miley Cyrus obviously favors Kat Von D, since she commissioned the infamous tattoo artist to ink her new tattoo. This latest tat represents the third time in a row Miley has gone under the needle at Kat Von D’s Los Angeles tattoo parlor, the two previous tats being the crossed arrows she had inked on the back of her right arm in February 2013, and the Da Vinci anatomical heart design the singer sports on the inside of her right arm, just below her Roman numeral tattoo. Miley’s anatomical heart tattoo was her most recent before this new tat, and it was done way back in March, so it’s about time Miley got inked again, don’t you think?

New Tattoo May Be on Miley’s Upper Arm

Rumors are swirling about Miley Cyrus’ new tattoo, and some reports suggest that the ink may be located on the singer’s upper arm. Although Miley seems set on keeping her tattoo a secret for now, Kat Von D let a little more info about the tat slip the morning after adding the design to Miley’s tattoo collection. “Woke up so amped! Did a fun tattoo on @MileyCyrus last night…Then tattooing again today, before heading to the recording studio!” Kat Von D wrote online on August 5. Miley Cyrus returned the compliment with her own post: “@thekatvond is so ILL.” With this new “fun” tat, Miley Cyrus’ tattoo total falls just short of 20, putting her in close proximity to other tattoo-addicted pop stars like Rihanna and Cher Lloyd. Even though Miley is only 20 years old, she obviously loves getting inked, and we can’t wait to find out what her latest tat is!