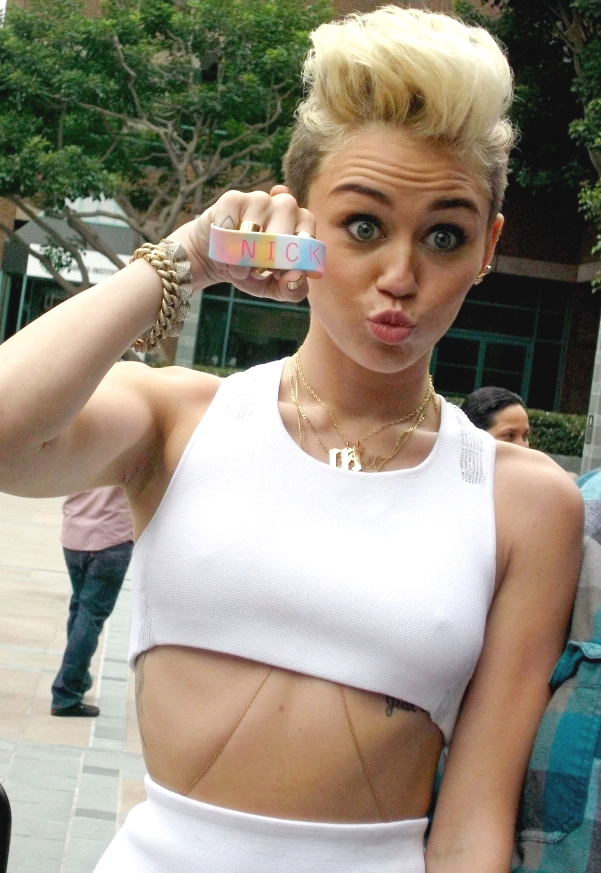 Miley Cyrus is never one to shy away from controversy, but the pop star’s latest claim may prove to be a little too much for the king of controversy: Chris Brown. Miley recently told German website Promiflash.de that she may consider getting a Chris Brown tattoo on her face for the next addition to her extensive tattoo collection – a move that she remarked would be “really good” for her music career. Obviously, the 20-year-old was joking about getting some Breezy-inspired ink, but the fact that she quipped that the tat would be “really good” for her career was kind of a back-handed insult to Chris Brown, who was arrested for assaulting on-again off-again girlfriend Rihanna in 2009. What kind of mess have you gotten yourself into now, Miley?

Miley Cyrus received quite a bit of criticism following the release of her racy “We Can’t Stop” music video – in which the singer sports skin-tight white pants and twerks her butt off – and now she is making headlines yet again, this time for a comment that may rub Chris Brown the wrong way. “Didn’t one girl get ‘Drake’ across her forehead?” Miley said about the infamous tattooed Drake fan. “That’s crazy! That’s a dedicated fan. I was thinking about getting ‘Chris Brown’ across this cheek.” While we can almost guarantee that there will be many new Miley Cyrus tattoos in the future, we’re pretty sure the singer won’t opt for a tat on her cheek, especially one featuring Chris Brown’s name. But who knows with this girl!

Considering the fact that Miley Cyrus has found herself the butt of many jokes and the subject of plenty of nasty rumors in her life, she should know better than to gossip about other people, especially about someone in the music industry and especially online for the world to see. The pop star may have gotten a little taste of karma for her Chris Brown tattoo comment though, because her visit to Germany last week was ruined due to food poisoning. “Sick in bed 🙁 away from home. Music is the best medicine,” Miley wrote on Twitter on July 25. “I may be the only person who comes to Germany and my first stop is take out sushi. I asked for it.” Miley Cyrus seems dead-set on establishing herself as a bad girl these days, and her latest comments about tattooing Breezy’s name on her cheek is sure to land her some new enemies.