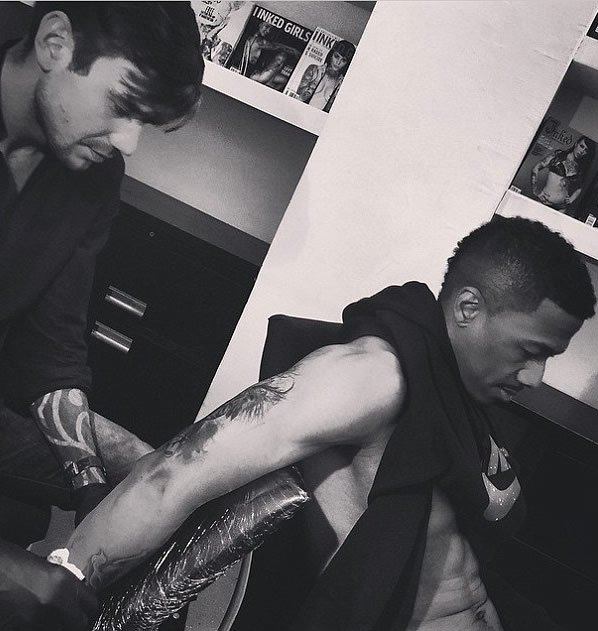 Nick Cannon made quite the statement last year when he covered up his gargantuan “Mariah” back tattoo after separating from his infamous pop star wife, and now the America’s Got Talent host has gone under the needle yet again, this time for a pretty large tattoo on his arm of a creepy devilish character holding a bloody heart. Nick Cannon’s new tattoo, which many people are speculating was inspired by his recent divorce from Mariah Carey, is inked on the back of his upper right arm, and was first revealed by the 34-year-old father of two in an Instagram post on March 6.

Back in October, when he first covered up his regrettable “Mariah” back tattoo, Nick Cannon said he was upset that photos of his new ink were leaked to the public before he was ready to show it off. At the same time, he revealed that he was planning a full back tattoo that would take more than 40 hours, as well as a full sleeve, which we are likely just seeing the beginnings of now. Nick Cannon’s new arm tattoo was inked by famed tattoo artist Dmitry Vision, who specializes in custom work and hyper-realism in his work. In a photo he posted on Instagram of the in-progress tattoo session, Nick wrote, “Spent the last 5 hours getting tatted by the legend @DmitryVision in NY up @InkedMag #Ncredible #TattLife.” 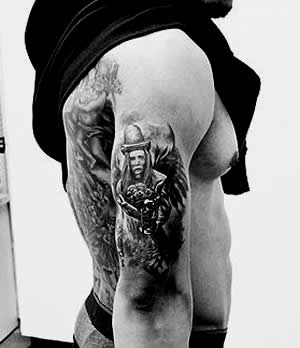 According to a spokesperson for INKED Magazine, which documented Nick Cannon’s new tattoo in a new celebrity series, “[Nick Cannon] uses tattoos as time stamps in his life.” In the TV host’s latest tattoo, which joins a gigantic piece on his back featuring Jesus on the cross and portraits of his twins, you can see a devilish character with long hair wearing a bowler hat, sporting wings on his back, and holding what appears to be a bloody heart in his hands. So, if it’s true that Nick Cannon’s tattoos function as “time stamps” of important moments in his life, could it be that this creepy devil tattoo is a symbol of his split from Mariah Carey, which took place last year following six years of marriage? What do you all think?