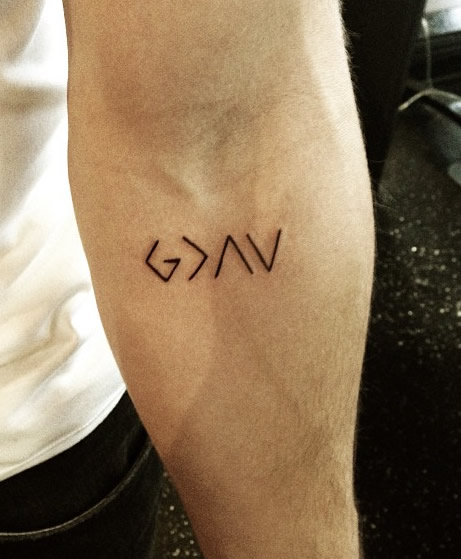 Looking at Nick Jonas’ new tattoo, one might think it was inked in the same hieroglyphics that Chris Brown used on his Fortune album cover. In reality, the mysterious ink on Nick Jonas’ arm is actually inspired by his religion and his belief in God. Confused? Well, when Nick Jonas revealed his new tattoo of the letter “G” follow by several symbols on Instagram this week, he accompanied it with the following caption: “God is greater than the highs and lows.” Get it?? A “G” for God, a greater-than symbol, an upside down “V” to represent the highs, and the letter “V” to stand for the lows. We have to admit, we think Nick Jonas’ tattoo is pretty clever, and not only does it symbolize the singer’s religious beliefs, but it could also be a tribute to his latest album, titled simply “V.”

Nick is the youngest Jonas brother, behind big bros Joe and Kevin, and already has two tattoos to his name at the age of 20, including the word “Mercy,” which is inked on the outside of his right arm. Nick Jonas’ latest tattoo is inked on the inside of his left forearm, and appears to have at least a similar meaning to his “Mercy” tattoo. The Jonas brothers are famous for their devout Christian beliefs, having made headlines previously for such religious acts as wearing purity rings. (P.S. – did you know that Kevin Jonas wore his purity ring right up until his wedding in 2009, at which point he ceremoniously swapped it out for a wedding ring? Now that’s devotion.) Even the Jonas brothers’ music points to their religious beliefs, including their song “Dear God.”

There are plenty of stars in the music industry who take inspiration (both for their music and their tattoos) from their religious beliefs, including the Jonas brothers, Justin Bieber, Miley Cyrus and others. Just last June, Justin Bieber got the word “Believe” inked in the exact same spot on his left arm as Nick Jonas’ religious tattoo, and the pop star has several other religion-inspired tattoos, including a Hebrew tattoo meaning “Jesus” on his ribcage, a portrait of Jesus on the back of his leg, a pair of praying hands on his leg, the Greek symbol tattoo on his arm meaning “Christ,” and an arm tattoo depicting a bleeding globe on a cross. If Nick Jonas follows in the footsteps of the inked-up Justin Bieber, there’s a chance the pop star could end up with 20+ tattoos of his own!