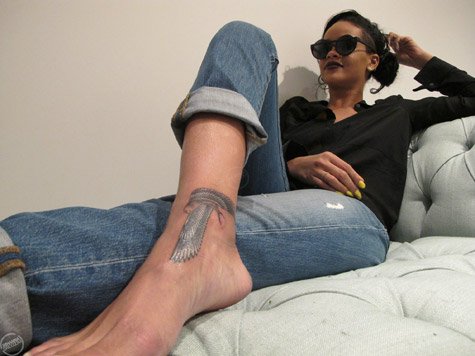 Just when you thought you were finally caught up on all Rihanna’s tattoos, she goes and gets another one! And this new tat is no girly cartoon skull or elegant string of stars. Rihanna’s new tattoo is pretty bad-ass and may or may not be a replica of an artifact dating back 2,300 years. Curious yet? Read on to learn more about the singer’s new ink and why she chose to get it inked on her body.

Tattoo artist Bang Bang McCurdy could probably shut down his shop, devote himself to inking Rihanna’s tattoos alone, and do juuuust fine. Pop superstar RiRi has added a new tattoo to her growing collection, inked by Bang Bang, and this one may have a double meaning. The most recent Rihanna tattoo features a pretty fierce-looking Egyptian falcon inked in black and white on the inside of her right ankle. Pictures of Rihanna’s falcon tattoo were posted on Twitter on June 16, 2012, and she immediately had fans wondering if the bird tat was meant to resemble the shape of a handgun. Knowing Rihanna’s personality, it probably was, and she probably didn’t really care if people noticed or not.

Curious about the meaning behind Rihanna’s falcon tat? Apparently, the falcon image in Rihanna’s ankle tattoo was meant to represent something positive, perhaps because the singer has faced some difficulties in her life lately. In addition to the assault she suffered at the hand of her ex, Chris Brown, in 2009, Rihanna was also dragged (figuratively) into the recent nightclub brawl between Brown and Drake, through no fault of her own. “Falcon: a light that shines in the darkness! Never close their eyes during sleep,” the Bajan superstar posted on Twitter after she got her new tattoo. If you’re wondering where Rihanna got the inspiration for her new falcon ink, so some research on the 2,300-year-old Egyptian artifact housed in the Metropolitan Museum of Art in New York City. Look familiar?

Rihanna Says Opening Up About Abuse “Gave Me Guns”

Rihanna finally opened up to Elle magazine about her current relationship with her abusive ex-boyfriend, revealing her relief about finally telling the truth: “It gave me guns. I was like, ‘Well, f—.’ They know more about me than I want them to know. It’s embarrassing. But that was my opening. That was my liberation.” Not only did Rihanna’s brutal experience with Chris Brown give her guns in the form of empowerment, it also probably had something to do with her gun tattoos! In the midst of the abuse rumors in 2009, Rihanna went and got a tiny black gun inked on her ribcage, just below her right armpit. She then showed up in pictures in 2012 sporting a huge gun tat on her right thigh while rocking a teeny bikini on a beach in Hawaii. Although Rihanna’s tattoo on her thigh turned out to be fake, the most recent of her tats also appears to have a gun theme. Trying to tell us something RiRi?