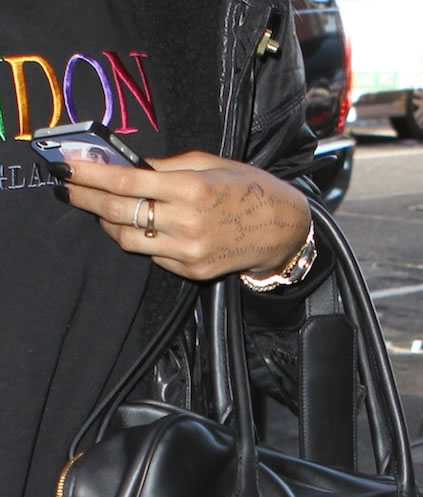 Bad gal RiRi recently had two – yes two – intricate tattoos inked on her right hand, and now by the looks of it, the pop star may be planning yet another hand tattoo, this time on her left. Apparently unconcerned about having to cover up an extensive hand tattoo just a few weeks after getting it inked, new pictures of Rihanna out and about in New York on November 17 have revealed a potential new tattoo on her left hand, in what looks like a simple black tribal tattoo design. What’s the deal RiRi?? Are you planning a new hand tattoo that matches your lacy henna-inspired ink?

Rihanna stepped out in New York City this week fresh off her Diamonds world tour, and in addition to a cozy black parka, the singer was also sporting what looked like the beginnings of a new tattoo on her left hand. The ink looks strangely similar to the traditional Maori hand tattoo RiRi recently had covered up, featuring a series of small black lines reaching from the knuckles on her hand down to her wrist. Some eagle-eyed fans spotted the tell-tale markings on Rihanna’s hand as she stepped into her NYC hotel with gal pal Cara Delevingne, and posed the question to the singer herself on social media. “Is that a new tattoo I see??” wrote one fan, to which RiRi replied “No Lol pen.”

Okay, so Rihanna may have just been doodling on her hand with black pen, but considering how happy she was with the henna-style tattoo Bang Bang recently inked on her right hand, it’s possible that RiRi could be planning to get a similar tat on her left. “Ri flipped out. Absolutely loved it, loved it,” Bang Bang said after Rihanna flew him 1,500 miles to the Dominican Republic to cover up the tribal tat she had inked on her hand in New Zealand in October 2013. Rihanna’s tattoos are always unique and cool, and we wouldn’t be surprised if she added some new matching ink to her left hand. What do you all think? Is Rihanna planning to get inked yet again?