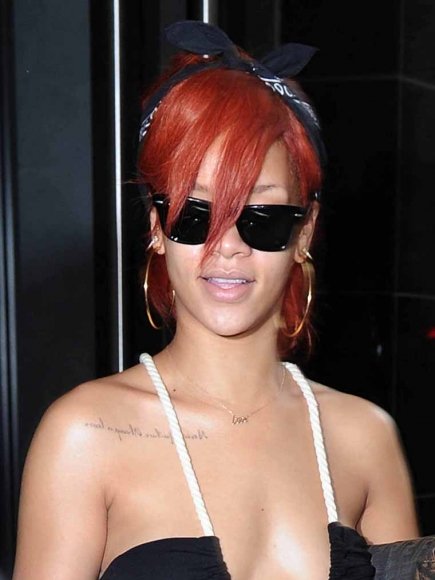 Rihanna’s thirteenth tattoo is a personal phrase intended as a form of self-motivation for the hugely successful star. Rihanna’s collarbone tattoo reads “Never a failure, always a lesson” and is printed backwards on her skin in cursive writing. The tattoo was done by Keith “Bang Bang” McCurdy, the tattoo artist responsible for many of RiRi’s tattoos. Bang Bang is the owner of New York City’s East Side Ink, a tattoo parlor that Rihanna has been inked at several times in the past few years. According to Bang Bang, Rihanna’s chest tattoo was written backwards because she wanted to be able to read it in the mirror, and her tattoo meaning represents her “motto in life for everything,” according to the star.

Rihanna’s shoulder tattoo was done by Bang Bang at East Side Ink, at 2 a.m. in December 2009. While the timing seems impulsive, Bang Bang says Rihanna told him ahead of time that she was coming in for a tattoo. When she got there, Rihanna told him what tattoo she wanted and that she wanted it tattooed backwards. Rihanna maintains that the phrase is something she holds true to her heart. “Instead of considering things to be mistakes, considering them lessons,” she explains. Rihanna chose this particular tattoo to be inked in gray rather than black, so that it would be more subtle. 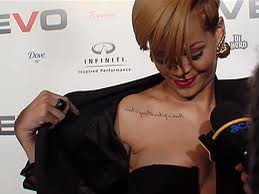 She didn’t want to draw too much attention to the tattoo, which is located just below her right collarbone, near her shoulder. This shows that Rihanna doesn’t like tattoos because of the media attention it gets her; Rihanna loves tattoos because they have a special and symbolic meaning for her alone.

Rihanna’s Motto and Her Tattoo

One of Rihanna’s newest tattoos, “Never a failure, always a lesson” represents a motto the pop star takes seriously: learning from your mistakes. It’s clear that Rihanna loves tattoos, illustrated by the numerous pieces of ink she currently has, but this doesn’t mean she chooses them at random.

The singer’s tattoos are there for all of us to see, but truly represent a personal aspect of her life. All Rihanna’s tattoos were designed or hand-chosen by the star, and symbolize an important aspect of her life. Hopefully her motto doesn’t change anytime soon though, because she’ll be seeing this collarbone tattoo every time she looks in the mirror!