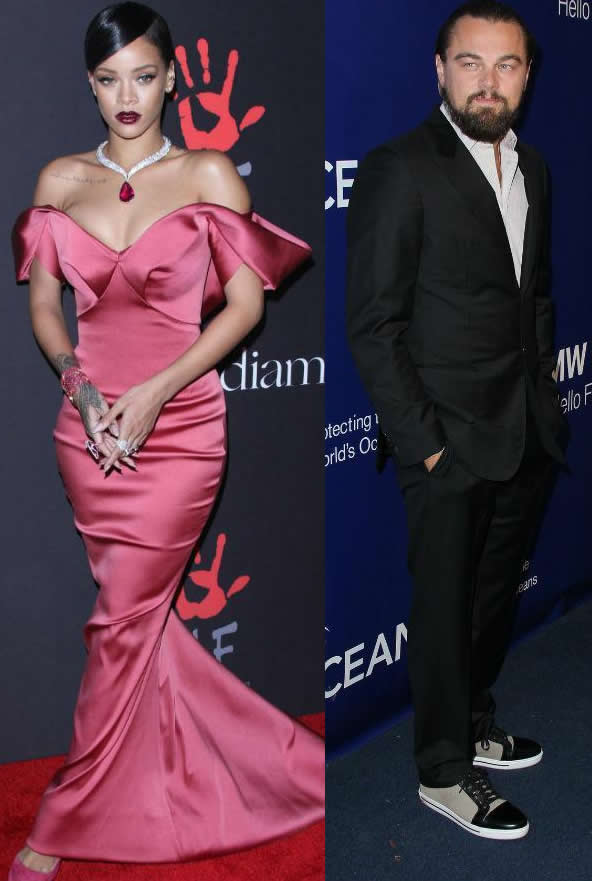 It’s been more than a YEAR since Rihanna got her last tattoo – the large cross inked on the inside of her right wrist – and new reports suggest that an unlikely source may be the reason behind RiRi’s recent tattoo drought…Leonardo DiCaprio! That’s right, apparently Rihanna and Leo have been hooking up lately, “no strings attached” style, and the actor has apparently convinced the inked-up pop star to hold off on getting another tattoo until she falls in love again, and then to get something that has to do with that relationship. Hold up though…since when does Rihanna let a man tell her what to do? Could it be Leo himself who wants to be the inspiration for Rihanna’s next tattoo??

It’s totally possible. Insiders say that Rihanna has completely fallen for Leonardo DiCaprio and his confident attitude, and is finding him more of a challenge than most of the men she’s dated in the past (Ahem, Breezy and Drake). So, according to one source, RiRi is staying true to her word and depriving herself of any new artwork until she finds love again. “Rihanna has always been the type of girl who does whatever she wants, when she wants,” the source says. “She wants a new tattoo on her body, but she’s stuck because Leo asked her to promise him she won’t let the needle touch her body until she falls in love again. She’s a woman of her word and she’s sticking to that.”

For those of you who have been living under a rock these past few weeks, Rihanna and Leonardo DiCaprio hooked up for the first time during a party at the Playboy Mansion earlier this month, and sources say Rihanna finds the 40-year-old actor charming and “irresistible.” We have to admit, Leo is a nice departure from Rihanna’s former flames, Chris Brown and Drake, both of whom brought her nothing but D-R-A-M-A. And while we’re disappointed to hear that the next Rihanna tattoo may be put on hold for a while, we like the idea of the Bajan beauty waiting until she falls in love again. And if that love just happens to be Leonardo DiCaprio, we certainly aren’t complaining!!