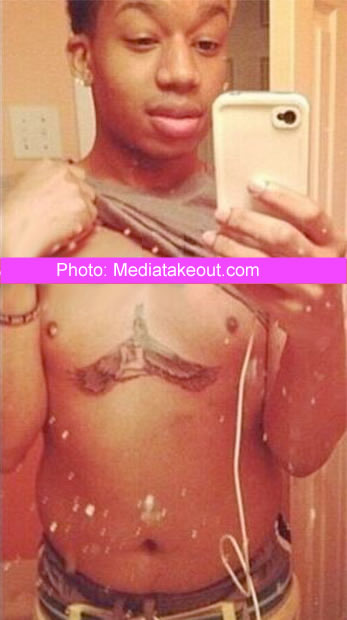 Yet another superfan has turned to the beautiful Rihanna for tattoo inspiration, getting a copy of the pop star’s goddess Isis tattoo inked on their chest. We’re not sure where the sudden urge to copy Rihanna’s tattoos has come from, but we’re definitely wondering what the Bajan beauty has to say about it. Earlier this year, a female RiRi fan chose to grace her body with an exact replica of Rihanna’s tattoo (although it was obviously inked by a less skilled tattoo artist), and even that was kind of overboard. This time, however, the Rihanna fan behind the buzz is a teenage boy, which is way, way worse. Let’s be honest – on Rihanna, the prominent goddess Isis tattoo she got inked on her chest last September looks sexy and cool. On the chest of a prepubescent boy, however, it just looks downright wrong.

The teenage Rihanna fan, who has since become an internet sensation, posted pictures online of himself getting a new tattoo to accompany pieces he already has on his shoulder and arm. To our amazement, the chest tattoo he opted for is nearly an exact copy of the (formerly) unique tattoo RiRi got inked on her ribcage in honor of her late grandmother, Dolly. Rihanna is obviously a fan of tattoos, and she has racked up quite an impressive collection of ink over the years, but when she debuted the goddess tattoo on her chest, it was obvious what an emotional connection the singer had with her beloved grandmother, who passed away from cancer early in 2012. The distinctive and prominent piece is one of Rihanna’s largest tattoos and portrays the Egyptian goddess Isis kneeling upright in the center of the singer’s chest, with her graceful wings extending under each of Rihanna’s breasts.

Not only do we think it’s kind of lame that fans of Rihanna are copying what used to be an original tattoo instead of putting their own spin on the unique idea, but it’s also kind of disappointing (although not surprising) that neither of the two people who have copied the Isis tat so far have even done the meaningful tattoo justice. First, the female fan whose Isis ink was larger and far less elegant than Rihanna’s, and now a teenage boy whose chest tat is much smaller and looks way out of place on his body. The only saving grace for this kid would be if he gets additional tattoos to surround it, like Chris Brown’s “Symphonic Love” tattoo with wings on his chest. Either way, Rihanna’s Isis chest tattoo reigns supreme, and we don’t see that changing anytime soon.