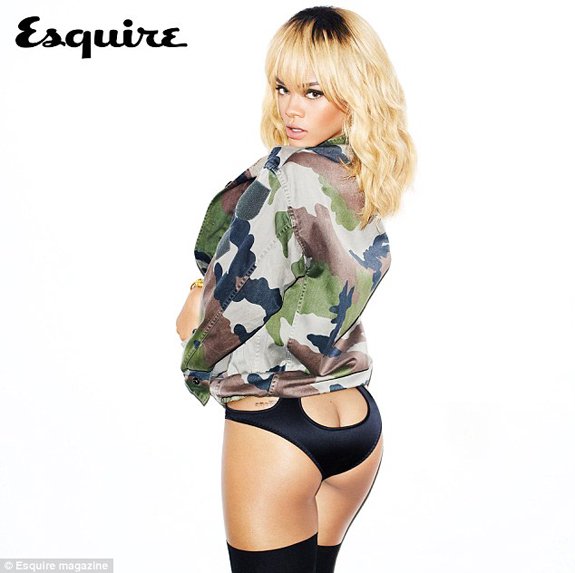 The official count for Rihanna tattoos is 18, but not everyone would agree on that number. The reason for the discrepancy regarding RiRi’s tattoos is that the pop star has kept one of her most recent tats a virtual secret…how unlike her! The 24-year-old singer has a little-known tattoo inked on her rear-end, but few people have been let in on this little secret of Rihanna’s, since she keeps the tattoo concealed most of the time. Rihanna isn’t exactly one to hide her tattoos from the public eye, so what’s the reason for all the secrecy? There are only a couple of pictures that reveal Rihanna’s hip tattoo, and you can find them here.

If you keep up-to-date on celebrity news, you’ve probably noticed that pop superstar Rihanna has made headlines quite a bit recently, more often than not because of a new addition to her array of unique tattoos. RiRi’s newest tattoo in particular – an image of a falcon inked on the inside of her right ankle – has drawn significant attention from a variety of media outlets since June 2012, mostly because the tat is in the shape of a handgun and because it is reminiscent of a 2,300-year-old artifact housed in New York City’s Metropolitan Museum of Art. But as new reports have been quick to focus on Rihanna’s falcon tattoo, attention has ultimately been siphoned away from another mysterious tattoo of Rihanna’s – one that was never officially revealed in public and has been all but forgotten by everyone else – but not us!

Rihanna Has 18 Tattoos and Counting

Most people would be quick to say that Rihanna has 17 tattoos, but what about the 18th tattoo of RiRi’s that everyone seems to have forgotten about? Back in January 2012, the Bajan beauty commissioned celebrity tattoo artist Mark Mahoney of L.A.’s Shamrock Shack to ink a white “Thug Life” tattoo across her knuckles. Rihanna posted pictures of her thug life tattoo on Twitter back in January, along with pictures of her laying on her stomach while Mahoney apparently inked something on her lower back or rear end. It wasn’t until the pop star was photographed in a skimpy bikini in Hawaii a few months later that her rear-end tattoo was finally unveiled, and then the new ink was even more clear in the Esquire UK photo shoot Rihanna did back in June 2012. RiRi even posted a pic that highlighted the secret tattoo on instagram, provoking many fans to ask what it says, but unfortunately no answer was given by the pop diva.   Rihanna definitely has a new tat on her derriere, so the question is – why does everyone else seem to be ignoring it?

What Does Rihanna’s Rear-End Tattoo Mean? Is it Tibetan?

Although there is clear evidence of Rihanna’s hip tattoo, it’s still not obvious what the new body art stands for. The mysterious tat is definitely written in a foreign language (rumored to be Tibetan) as are many other tattoos of hers, including Rihanna’s rebelle fleur tattoo (French), the Sanskrit prayer tattoo inked on her hip, and her Arabic side tattoo. The foreign language isn’t the only thing that makes Rihanna’s hip tattoo so curious though. In addition to being all but indecipherable to the general public, the singer’s rear-end tat has also taken on a bit of a mysterious quality because she has so far kept it relatively secret. It’s true that Rihanna doesn’t always open up to the public about her tattoo meanings, but it’s pretty hard to deny the tattoos that are inked in plain view on her shoulders, hand, neck, fingers and side. Rihanna’s hip tattoo however, remains concealed most of the

time – unless she’s stripping down for Esquire, that is – and the 24-year-old singer has curiously stayed mum on the topic.

Few days go by without Rihanna posting a picture of herself on Twitter for all her fans to see, and most of these pictures feature one or more of her many body tattoos. And regardless of the tattoos featured in the picture, you can bet money that more than one person has something to say about it too. Even when Rihanna was sporting fake tattoos, including a large gun on her thigh and anchor and knife tattoos on her arm, all of which were part of her Battleship role, rumors swirled amongst Rihanna fans and foes about the new pieces of ink. Once it was discovered that Rihanna’s tattoos weren’t real, everyone calmed down a little bit, but the tattoo controversy was definitely heated while it lasted. But then Rihanna goes and gets a real tattoo inked on her rear-end and everyone either doesn’t notice it or doesn’t seem to care? Could it be because the pop star has so many tattoos, a new tat just doesn’t drum up the publicity it used to, or is there another reason behind the secrecy regarding Rihanna’s hip tattoo?

One Response to: What’s the Deal With Rihanna’s Secret Tattoo?