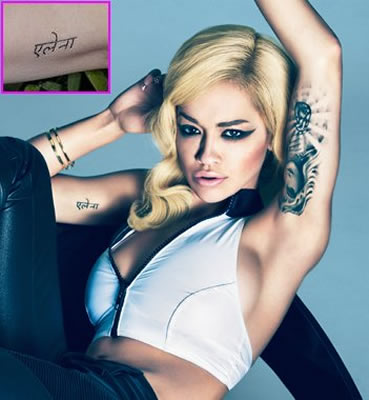 We absolutely love to see celebrities with tattoo tributes to family members, because it means they aren’t the crazy, money-obsessed cyborgs the media often makes them out to be. Rita Ora, for example, may have topped the UK charts at the age of 22 after being scouted by Jay-Z’s Roc Nation label at 18, but she’ll never forget her beloved sister and brother, thanks to the tattoos of their names Rita has on her arm. On the inside of her right bicep, near her armpit, Rita has a tattoo inked in black that features her sister’s name, Elena, in Hindi, not far from the tattoo of her brother Don’s name – also in Hindi – that she has inked on the inside of her right forearm. Looks like Rita is a family gal at heart!

Rita was born in Pristina, in what was then Yugoslavia, but is now Kosovo, and her family moved to London when she was just a baby. “My childhood was great, my family was great. I wasn’t in a mansion or anything but we made it work,” Rita had said about her humble upbringing. “We grew up in Ladbroke Grove. Me, my mom, my siblings and my dad in a 3-bedroom flat. I shared a room with my sister my whole life.” It’s no wonder those two are so close! Rita Ora’s tattoo of her sister’s name was inked in New York in April 2012, and talking about her family during an interview that same year, Rita said, “I have a sister, Elena, she’s 23. I just got her name tattooed on me.” We’re surprised Rita doesn’t have tats dedicated to her mother and father too, but she may have plans for those tattoos in the future…

Like many pop stars and other celebrities, Rita credits her family for helping her keep her feet on the ground, even as her music career reaches dizzying heights. “My family have emotionally prepared me,” she said during a Vogue interview in December 2012. “I don’t know what it feels like not to have a great family support system – I was lucky to have that.” During another interview, Rita said, “My sister is two years older than me, she actually works with me now and manages my day to day things. My brother is 14, he still goes to school and plays on his Xbox all day.” It’s hard to imagine a beautiful international superstar like Rita Ora having a teenage brother who likes to play video games, but it’s nice to see she has such a normal family!