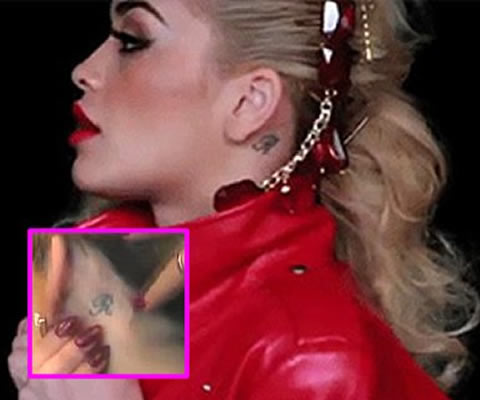 In the same spot as her Sagittarius tattoo, but behind her left ear, Rita Ora has a tattoo of a capital letter “R” she had inked in a black script font at some point before January 2013. Unlike some of her more recent pieces – namely the huge tattoo of a pinup girl from an Alberto Vargas painting called “Memories of Olive” that she had inked on her side in September 2013 – Rita’s “R” tattoo is very small, simple and discreet. Obviously Rita Ora’s tattoo of the letter “R” represents her name, but apparently that’s not obvious to everyone. During a Tat Nation interview in 2012, KDWB’s “Big D” (jokingly) asked the singer “What’s the R for?” Duh Big D!

Although we can only imagine how painful it is to get inked in such a bony spot on the skull, we think behind-the-ear tattoos are pretty darn cool. Similar to Miley Cyrus’ tattoos that say “Rolling $tone” on the bottom of her feet, Rita’s “R” tat is in a pretty discreet location, and no one will see it unless she wants them to. Because of that, the ink seems far more personal and intimate than tattoos say, on a person’s arm, leg or torso, all of which would be visible in regular clothing or a bathing suit.

Back in August 2012, when Rita Ora and Rob Kardashian were an item, the pop star got another letter “R” tattoo, this time as part of a larger piece that said “R-O-B-K” across the knuckles on her right hand. In return, Rob got “R-I-T-A O-R-A” inked across his fingers. Fortunately, Rob and Rita’s matching finger tattoos turned out to be fake! She really dodged the bullet on that one, considering the couple called it quits just four months later. The moral of the story…think before you ink!