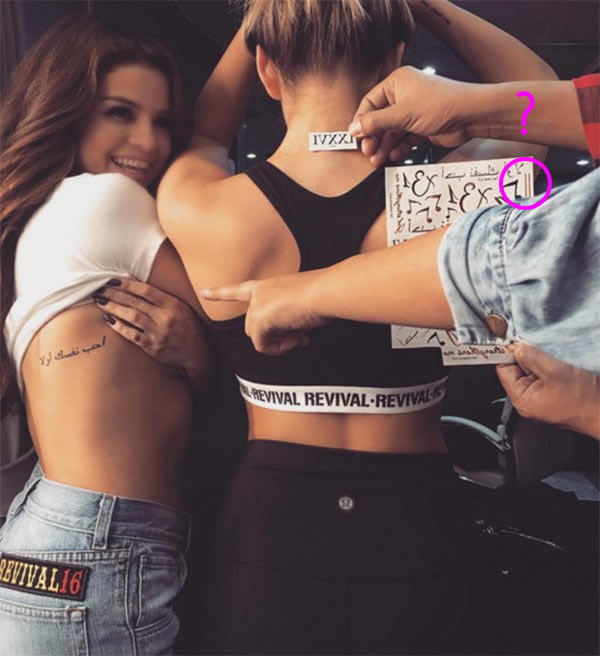 The internet has been abuzz ever since Selena Gomez mentioned in a recent Instagram post that she would be selling temporary tattoo copies of her own ink at her Revival Tour merch table…AND that she has a 7th tattoo no one even had a clue about. Sure, Selena mentioned in an interview last fall that she was planning on getting another tattoo, but the pop star, sneakier than you might imagine, has apparently gotten the new ink already, and has somehow managed to keep it under wraps.

The Instagram post in question was uploaded to Selena Gomez’s account on April 20, and shows a grinning Selena posing alongside another female, both wearing Revival Tour 2016 gear. In the photo, Selena is lifting up her shirt to show off the “love yourself first” Arabic tattoo on her back, and another person is holding up a sheet of the Selena Gomez-inspired temporary tattoos, which the pop star noted will only be available at her Revival Tour merch table. Most people have already noted that a near half-naked Selena looks happier than ever, and beautiful to boot, but it’s the photo’s caption that really caught our attention. 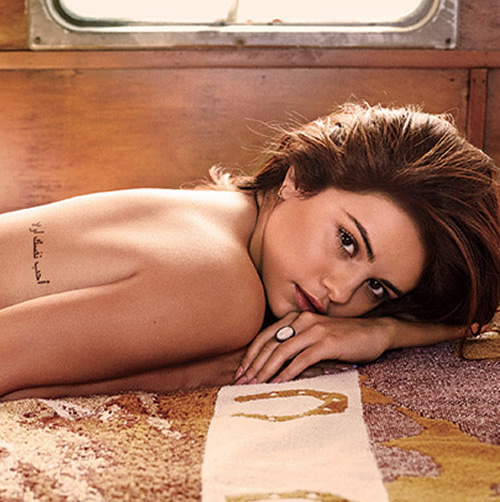 Selena writes in the Instagram post, “ALSO all of my tattoos will be available. Each and every one of them mean so much to me. I have 7 tattoos (and counting).” Up until that point, the world was only aware of six Selena Gomez tattoos, which means the singer got tattoo number seven when we all weren’t looking. So what is the design of her 7th tattoo? We don’t know for sure yet, but we will definitely wager a guess. If you look at the temporary tattoo sheet in Selena’s Instagram pic, you’ll see all the way to the right, an image of two parallel vertical lines, right next to her music note tattoo. None of Selena Gomez’s tattoos look quite like those two vertical lines, which means the new ink likely incorporates that design.

Back in October 2015, Selena gave an interview with Refinery29, and in it, talked about the evolution of her tattoos, beginning with her music note wrist tat. “I wanted something small to test the waters,” she said. “Now I’m addicted.” She then went on to talk about her future tattoo plans, mentioning that she planned to get a 7th tattoo “to celebrate her own revival – the album and the personal reinvention.” Based on the two mysterious vertical lines represented on Selena Gomez’s temporary tattoo sheet and her intention to get a “revival” tattoo, what do you think the pop star chose for the design of her 7th piece?? Leave your guesses in the comments section below!