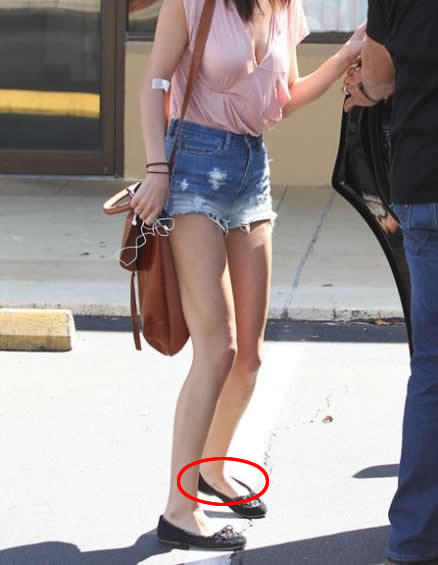 You probably already know about the tiny music note Selena sports on her wrist and the Roman numeral tattoo she recently got inked on the back of her neck, but it seems that the sweet and innocent Selena may have a secret foot tattoo as well! Selena was photographed leaving a blood work clinic in Florida last March, and she was sporting more than just short shorts and a pink blouse. If you take a peek at the top of Selena’s left foot, you can see a tell-tale mark that looks an awful lot like a foot tattoo. Shortly after the picture was taken, some people speculated that the “tattoo” may read “Scarlett,” for the pop star’s unborn baby sister, whom Selena’s mother lost in a miscarriage late in 2011. Personally, we think Selena’s foot tattoo looks like it says “believe.”

Pop star Selena Gomez is best known for her squeaky-clean Disney image, but the singer is obviously trying to shed that image, and one way she has done so is by adding to her growing collection of tattoos. After getting the music note tattoo on her wrist in February 2012 (which was a huge shock for the singer’s fans by the way) Selena claimed that she was done with the ink. When asked if the wrist tattoo hurt, Selena said, “Yes and no. I was really scared but I got a little one.” Did she plan on getting more? “I was a pansy so I’m good now for a while.” Apparently not! As those of us with tattoos know, it’s rarely ever “one and done,” and so, Selena revealed a slightly larger Roman numeral tat dedicated to her mother on the back of her neck just seven months later, in September 2012. According to this surprising photograph though, Selena may have secretly hit up the tattoo parlor sometime last year for some new mysterious ink on her foot!

Is Selena’s Foot Tat a Fake? 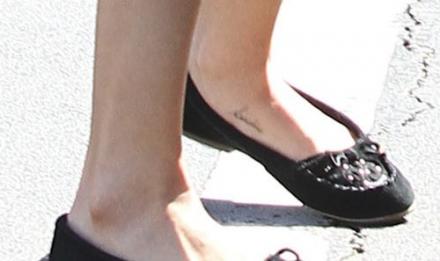 Like her ex, Justin Bieber, Selena Gomez likes to keep us all on our toes by inking fake tattoos on her body every once in a while. The pop star was previously rumored to have a cross tattoo on her hand (like her gal pal Demi Lovato’s cross tattoo), but it turned out that the tat was drawn on with pen. Selena also sported a “Justin” tattoo with a tiny heart on her right wrist during a Las Vegas performance in September 2011, but that tattoo was inked in Sharpie (thank goodness, considering how that relationship ended). Now that you’ve caught a glimpse of the ink on Selena’s foot, what do you think? Is Selena Gomez’s foot tattoo real or just another fake-out? Check back with us soon, ’cause we’ll be the first to let you know!