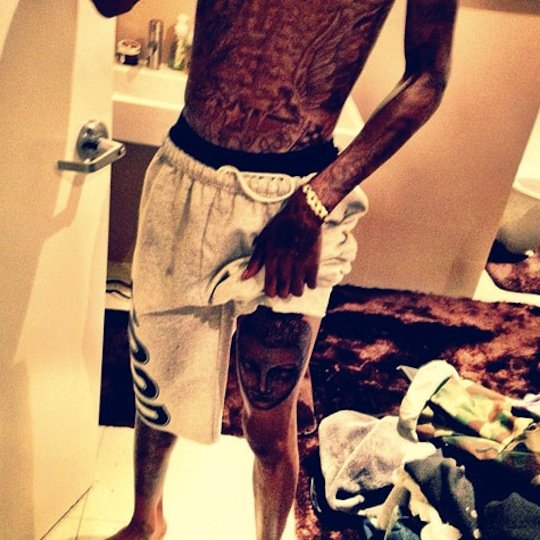 Remember when Amber Rose revealed the hilarious but also very well done tattoo of hubby Wiz Khalifa’s face on her arm back in May? Well the Wiz himself has followed in his better half’s footsteps, but it’s not Amber Rose’s face the rapper has forever immortalized on his body. Nope…it’s the Buddha! Wiz Khalifa took to Twitter in late August to reveal his most recent tattoo – a giant Buddha portrait covering his entire thigh on his left leg – along with the caption, “Buddha On My Thigh.” We’re wondering what Miss Rose thinks of the religious ink!

Wiz Khalifa’s tattoo features the face of Buddha inked in black and white, with his hair pulled up in a top knot and a bindu dot between his eyes, which is also where the third eye or “chakra” is said to exist. The Buddha is a religious icon on whose teachings Buddhism was founded, and the name “Buddha” actually means “the enlightened one” or “awakened one.” There are many different artistic variations of Buddha’s believed appearance, but in almost every case, the wise sage is depicted with his eyes half-open, half-closed, like the face inked on Wiz’s thigh. According to Buddhist beliefs, this represents the ability to achieve balance – to view the outside world at the same time as our inner selves.

This is all well and good, but Wiz Khalifa (real name Cameron Jibril Thomaz) is no Buddhist. 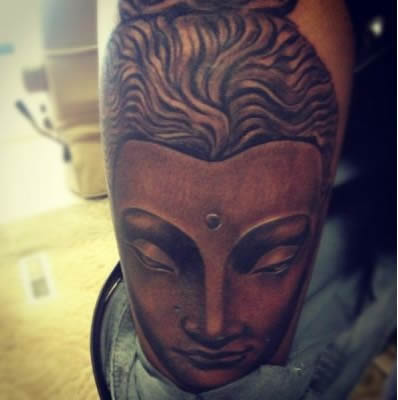 No one is entirely sure if Wiz actually considers himself a Muslim, but his grandfather was Muslim, and the name Khalifa is an Arabic word that translates to “leader” or “successor.” So what’s the deal with Wiz’s new Buddha tattoo? Has he finally discovered the path of inner peace and enlightenment, or does his ink simply represent his widely-publicized affection for marijuana? What do you all think?