Keith “Bang Bang” McCurdy may have been the first tattoo artist to entrust his skin to the not-so-steady hands of his favorite pop star clients, but the unorthodox (and illegal) practice is quickly becoming a hot new trend, with inked-up celebrities turning the tables on all their favorite tattoo artists. The latest pop-star-turned-tattoo-artist is Miss Cheryl Cole, who recently revealed a gigantic tattoo of English roses covering her lower back and butt. Cheryl Cole’s tattoo was inked by famed tattoo artist Nikko Hurtado, owner of California’s Black Anchor tattoo studio, and Cheryl has now returned the favor, trying her own hand at tattooing Hurtado’s leg.

Bang Bang’s leg is covered in tiny designs done by his favorite pop star clients, including an umbrella compliments of Rihanna, a “Swaggy” mouse inked by Justin Bieber, and a smiling peppermint done by Katy Perry. More recently, new clients Rita Ora and Cara Delevingne added their own designs to Bang Bang’s leg – a dove with boobs and Cara’s initials “CJD” inside a heart, respectively. This unusual practice began with Rihanna, when he had her ink the umbrella tattoo on his leg in 2009 as a thanks for all the publicity she brought him. Since then, as Bang Bang’s career has reached epic heights, it has become a sort of tradition. “That’s kind of my deal. I’m like a needy fan and I need a 30 minute autograph,” Bang Bang explained.

Now, tattoo artist Nikko Hurtado apparently wants in on the tattoo tradition started by Mr. McCurdy, because he recently had Cheryl Cole ink his leg Bang Bang-style. On October 27, the pop star posted pictures of her tattooing Hurtado, adding to his collection a tattoo of black sunglasses, a red heart and two stars with a swirly design below.

“You learn something new everyday!!!” Cheryl captioned the photos of her playing tattoo artist. “I got to tag the best tattoo artist with my first and last tattoo @nikkohurtado designed bespoke by yours truly.” As Hurtado follows in the footsteps of the infamous Bang Bang, we’re wondering how long it will take for other tattoo artists to join in on this unique tattooing trend.

Some people may call Bang Bang crazy for putting himself at the mercy of tattoo-addicted celebrities, but we think it’s pretty cool that he has so much trust in his clients that he allows them to put a permanent mark on his already inked-up body. As Bang Bang said in a June 2013 interview, having a great relationship with your tattoo artist is key. He explained: “[You have to] do a lot of research. Then you meet them and see if you have the right vibe. Because you’re going to sit with them for hours and you want to get along with them. So that’s really important.” Judging by his impressive collection of celebrity ink, Bang Bang gets along with just about everyone! 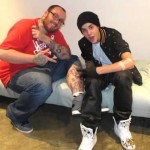 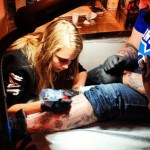 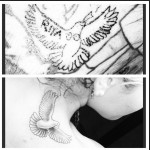