When it comes to his hometown of Toronto, Canada, Drake is one proud man. That’s why the singer takes every opportunity he can to get a Toronto pride tattoo inked on his body, the most recent being an intricate tattoo of the iconic CN Tower he had done on his arm this week. If Drake’s new tattoo looks familiar, it’s because he already had a very similar CN Tower tattoo located on the inside of his left bicep. But this one’s different. Well, sort of. It’s inked in a different spot and features a pretty cool and unique circle, arrow and dot design, but when it comes to tattoos of the CN Tower, how many does one guy really need? Well, Drake actually replaced his old CN Tower tat with a large eye tattoo over the summer, so he only has one piece dedicated to the CN Tower now. So there.

Drake’s new CN Tower tattoo was inked by Shamrock Social Club’s Dr. Woo, and the famous tattoo artist posted a photo of the new ink on Instagram on January 7, along with the caption: “A CN Tower one for the homie @champagnepapi.” As soon as we spotted the photo of Drake’s tattoo posted online by other media outlets, we knew right away the tat was done by West Hollywood tattoo artist Dr. Woo, who has become famous for using a compass-like arrangement of circles, dots and arrows in his work, which his clients have taken to calling “Woo arrows.” Dr. Woo has inked several other of Drake’s tattoos, including his dad’s mugshot tat, and the number “6,” praying hands emoji and quote tattoos on his forearms. 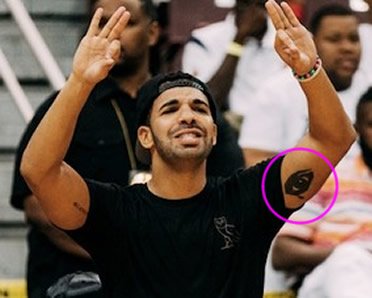 In case you’re unfamiliar with the CN Tower, it’s a communications and observation skyscraper located in downtown Toronto, and the name “CN” originally referred to Canadian National, the railway company that built the tower. Drake got his first CN Tower tattoo back in January 2012, but covered up the ink with a large tattoo of an eye, which he first revealed in June 2014. It’s hard to tell where his new CN Tower tat is located in the photo Dr. Woo posted on Instagram, but it looks like it’s probably inked on the back of the upper part of his left arm, a spot that was previously devoid of tattoos. In addition to his new arm tattoo, Drake has several other Toronto pride tats, including his old CN Tower tattoo and the “416” tattoo on his side.

So what do you all think of Drake’s new CN Tower tattoo? Better than the old one??