Besties Kylie Jenner and Hailey Baldwin may have gotten their mini hip tattoos months apart, but it looks like they may have planned the location of the ink together, judging by a sexy poolside shot Kylie posted to Instagram on May 30. From the looks of it, Kylie, Hailey and a few other gal pals were enjoying a sunny day by the pool on Memorial Day, and the models and partners in crime couldn’t help but take a snap of their “baby tats,” both inked in the same spot on their hip line.

Miniature tattoos are the new trend in the world of ink, and Hailey Baldwin’s mini tattoo was inked just last week by the king of tiny tattoos, NYC-based artist, JonBoy. Done in an elegant black script on her left hip, Hailey’s tattoo features the word “gente,” which is the Portuguese word for “people.” Being that her mother, Kennya, is of Brazilian ancestry, it’s likely that Hailey Baldwin’s hip tattoo is a tribute to her heritage.

While Hailey Baldwin’s tattoo matches the one her BFF Mari Mckinney got during the same tattoo session, it just happens to be in the exact same spot as Kylie Jenner’s, but on the opposite hip. Kylie’s mini tattoo is the phonetic spelling of the word “sanity” inked on red on her right hip back in November 2015. Kylie Jenner’s tattoo was done by the master himself, celebrity tattoo artist Keith “Bang Bang” McCurdy.

In a series of photos posted on Instagram during the Memorial Day holiday, Kylie and Hailey are joined by gal pals Cami Morrone, Kendall Jenner and Lauren Perez, and Kylie captioned one of the pics, “girls, girls, girls.” In order to show off their matching “baby tats” though, Kylie and Hailey broke away from the group at one point and snapped a photo of themselves standing facing one another just inches apart, with their “sanity” and “gente” hip tattoos on full display. 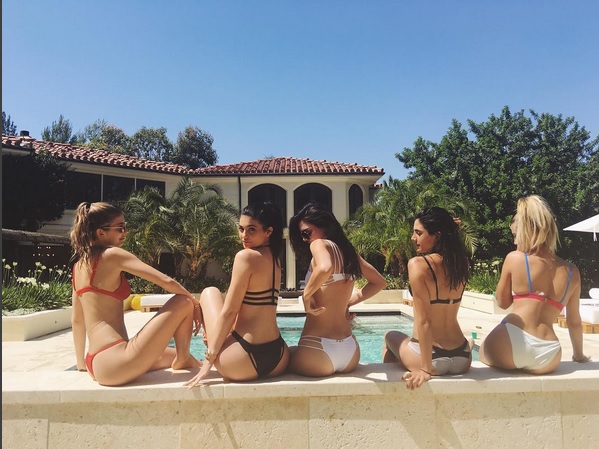 Kylie Jenner is a huge fan of miniature ink, and, in a recent video the model posted on Snapchat, she included a text overlay that says “I want another baby tat.” In addition to her “sanity” hip tattoo, the 18-year-old also has a tiny read heart inked on the back of her arm, a small inking of her grandmother’s name “Mary Jo” on her arm, and a squiggly red “M” tattoo on her finger. Hailey Baldwin also has quite a few small tattoos already (seven!!), but we have a feeling both girls may be in the market for some new ink!