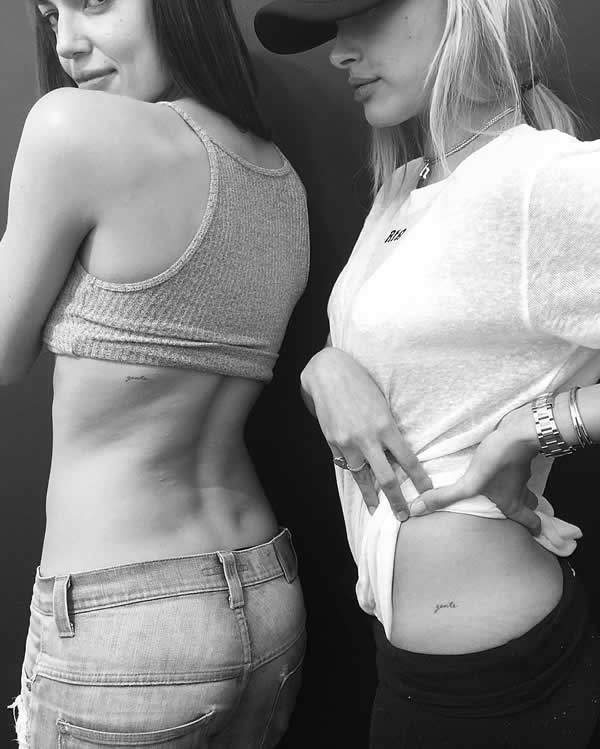 Hailey Baldwin is the queen of the cool miniature tattoos, and the model added yet another tiny piece to her collection this week – a “gente” tattoo inked in a gray script font on her left hip. Hailey Baldwin’s tattoo was done by artist JonBoy of West 4 Tattoo, while she and model friend Mari Mckinney were out and about in New York City earlier in the week. JonBoy uploaded a photo of Hailey’s hip tattoo to his Instagram account on May 23, along with the caption “gente” and two Brazilian flags, which is a big hint as to the meaning behind the tiny ink.

Her new “gente” hip ink marks tattoo number seven for Hailey Baldwin, who debuted her first piece, a “VI.X.XC” wrist tattoo of her parents’ wedding anniversary in Roman numerals, just a little over a year ago. She is quickly becoming as inked as some of her famous friends, like Justin Bieber and Kendall Jenner, and her cousin Ireland, but the 19-year-old is careful to choose pieces that have an important meaning for her. Her new “gente” hip tattoo, for example, is the Portuguese word for “people,” and is likely a tribute to her Brazilian heritage on her mother’s side. Hailey’s mother, Kennya Baldwin, is Brazilian, and her maternal grandfather has Portuguese and Italian/Sicilian ancestry, so this new “gente” hip tattoo is a sweet way for the model to pay tribute to her family. 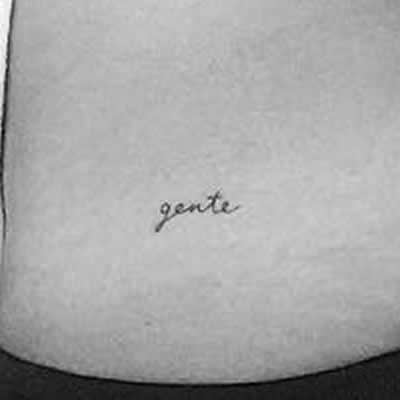 Mari Mckinney got a matching “gente” tattoo on her ribcage during the same tattoo session, so, in a way, Hailey’s hip tattoo is also a friendship tattoo with her fellow model friend. A third possible meaning for Hailey Baldwin’s tattoo is a tribute to the church she is affiliated with, Hillsong, which JonBoy hashtagged in the Instagram post of the model’s ink. The slogan of the church, located in New York City, is “Love God. Love Life. Love People.” Hailey is close to a famous pastor who has preached at Hillsong, Chad Veach, and got a tiny “g” tattoo inked behind her ear last year as a tribute to his ill daughter, Georgia.

As much as she loves tattoos, Hailey Baldwin seems to be primarily attracted to JonBoy’s miniscule, meaningful tattoos, and has commissioned the NYC artist to ink all or most of her tats, including the small heart inked on the back of her calf and her matching “Baldwin” finger tattoo with cousin Ireland. JonBoy is also the tattoo artist who gave Hailey Baldwin’s on-again, off-again boyfriend, Justin Bieber, the tiny cross tattoo on his face earlier this month.