**Update: Thanks to an Instagram photo uploaded by Kylie herself in December 2015, we now know that her hip tattoo is the phonetic spelling of the word “sanity,” stylized as \′sa-nƏ-tè\.

Kylie Jenner shocked the world when she debuted a small red heart tattoo on her arm (her first-ever!) while celebrating her 18th birthday back in August, and now the model has gone back under the needle for tattoo number two, courtesy of celebrity tattoo artist, Bang Bang. According to a new Snapchat video uploaded by Kylie herself, the 18-year-old beauty commissioned Bang Bang to ink a sexy new tattoo on her lower left hip/butt area, and then commemorated the tattoo session by turning the needle on Bang Bang and giving him a Kylie Jenner original.

Kylie Jenner’s tattoo was inked on November 9, during a trip to New York City, where her father, Caitlyn Jenner, was being honored at the Glamour Women of the Year Awards. Apparently, Kylie decided to take some time out for herself during the trip and visit Bang Bang’s tattoo shop, which has become one of the most sought-after tattoo studios in the country. And while the model has yet to reveal the meaning behind the design, Kylie Jenner’s tattoo appears to be a short line of text, most likely an inspirational quote or the name of someone she holds close to her heart (Tyga???).

The tattoo Kylie gave Bang Bang featured the letter K and a crown, which she placed on the front of his right leg, and is surely a reference to her self-appointed title of King Kylie. There’s no doubt that Kylie was a little nervous while tattooing Bang Bang, but for the insanely talented tattoo artist, it was just another day at the office, and following the tattoo session, he posted a photo of himself and Kylie on Instagram, along with the caption “My newest victim @kyliejenner.” He then shared a video of Kylie working on his latest tattoo, writing, “Kylie and I traded tattoos.” 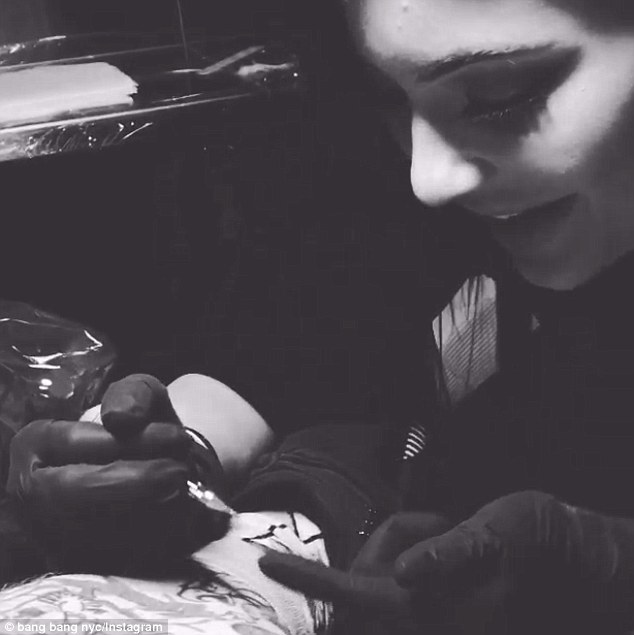 The fact that Kylie Jenner inked a tattoo on his leg is par for the course when it comes to Bang Bang; the tattoo-artist-to-the-stars almost always has his celebrity clientele return the favor after inking their tattoos, and currently sports tats done by A-listers like Justin Bieber, Chris Brown, Rihanna and Katy Perry. And while Kylie Jenner and older sis Kendall have mostly stuck to fake Sharpie tattoos in the past, both girls appear to be into real tattoos these days, and we can’t say we’re disappointed! What tattoo do you all think Kylie got inked on her hip? Let us know in the comments section below!