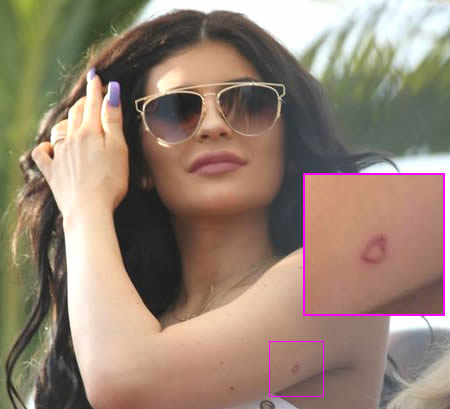 Following in the footsteps of big sis Kendall, Kylie Jenner apparently went under the needle for her first-ever tattoo, which she debuted while continuing her 18th birthday celebrations in Montreal, Canada over the weekend. Kylie, who turned 18 on August 10, has decorated herself with various fake Sharpie tattoo designs in the past, but word on the street the tiny red heart outline she has inked on the back of her left arm is the real deal, and may be a tribute to her inked-up beau, Tyga, whom the model has been dating since earlier this year.

Just a couple of months ago, Kendall Jenner raised eyebrows when she went against Kim Kardashian’s wishes and got her first tattoo – a tiny white dot inked on her middle finger by NYC-based tattoo artist JonBoy. Kendall has since gotten her second tattoo – a white broken heart tattoo on her other middle finger – and now it seems Kylie may be jumping on the bandwagon with this new heart tat. Fortunately for them, both girls have decided to keep their new ink low-key and discreet, presumably so it doesn’t interfere with their modeling careers.

Kylie Jenner hasn’t gone public with the meaning behind her new ink, but an insider reportedly said, “Kylie got her heart tattoo to symbolize all the love in her life – and obviously Tyga is a big part of that. He has her heart completely, so of course he was on her mind when she chose the design. Fortunately, she’s smarter than to get his name permanently inked on her.” Not so smart apparently, is Tyga, who got Kylie’s name scrolled across his arm back in April, shortly after the two started dating, in a very public (and permanent) declaration of his love for the then-17-year-old.

Kylie may be the type to be one-and-done with tattoos, especially since Kim Kardashian told her younger sisters that you “don’t put a bumper sticker on a Bentley,” but if Tyga has anything to say about it, the 18-year-old may soon find herself back in the tattoo artist’s chair. According to one report, “Tyga obviously loves tattoos and thinks [the new heart ink] looks great on Kylie. He’d love for her to be covered in ink but he knows that just isn’t her. Still he does think she’d look great with some classy looking designs strategically placed on her body.”

Stay tuned to keep up to date on any future Kylie Jenner tattoos!