Following a powerful performance at the 88th Academy Awards where 50+ survivors of sexual assault – male and female – stepped out of the shadows and joined hands in front of millions of people, Lady Gaga debuted a new tattoo on her shoulder featuring a symbol of unity. Lady Gaga’s new tattoo is inked on the back of her left shoulder, between her monster paw and “Dad” heart tattoos, and features a symbol with two intersecting images representing unity. Gaga debuted her new unity tattoo on Snapchat, captioning the image with a rocker hand sign and earth emoji.

During the Oscars last Sunday, Lady Gaga sang “Til It Happens to You,” a nominated song she co-wrote with Diane Warren for “The Hunting Ground,” a CNN documentary that explored the issue of rape and sexual assault on college campuses across the country. The performance received a standing ovation from the stars gathered inside the Kodak Theater, and many celebrities and viewers at home were moved to tears by Gaga’s heartfelt rendition of the song, which was described by others as “chilling,” “powerful” and “haunting.” 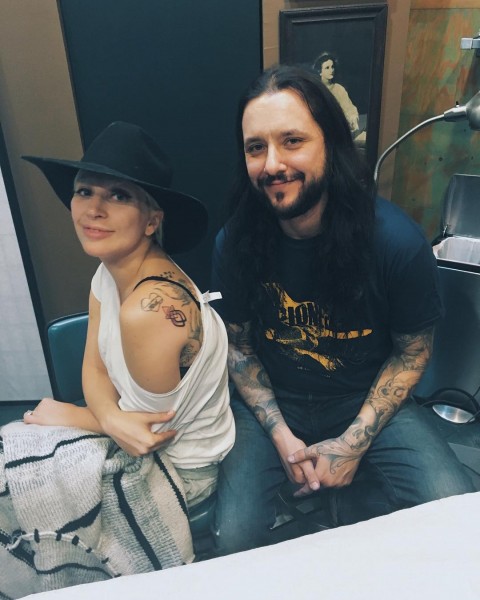 “That first day of rehearsal we were all very hesitant,” said 21-year-old Sage Carson, who, along with 49 others, was part of Lady Gaga’s Oscars performance. “Some who had spoken out had been very exploited. There was a lot of hesitation. Lady Gaga was crying. She hugged us all and she talked about her experience as a survivor.” During the three days of rehearsal prior to the Academy Awards, Sage and her fellow sexual assault survivors bonded with one another and about half of them ended up getting matching unity tattoos, including Gaga herself. 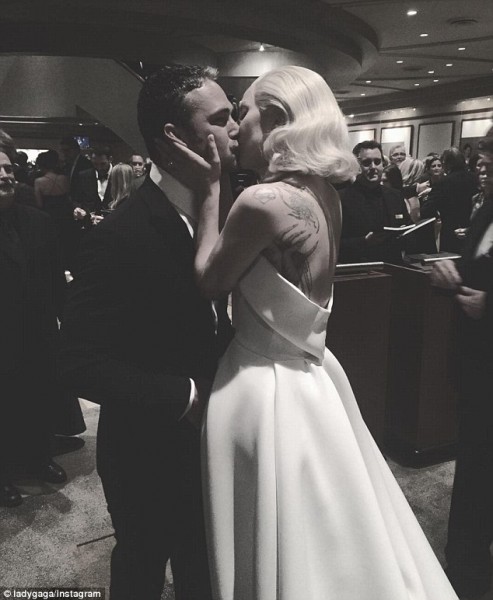 Lady Gaga has spoken openly about being a survivor of sexual assault, and “Til It Happens to You” obviously holds a deep meaning for the 29-year-old, who now has a permanent reminder of the powerful Oscars tribute in her unity shoulder tattoo. In an Instagram photo she posted following her Oscars performance, Gaga doesn’t yet have her new tattoo, but she captioned the image of her and fiancé Taylor Kinney kissing: “I never thought anyone would ever love me because I felt like my body was ruined by my abuser. But he loves the survivor in me. He’s stood by me all night proud and unashamedly. THAT’S a real man.”

A big thanks to Instagram follower @nickthom333for the tip on this tattoo!