Unless you’ve been living under a rock for the past three years, you know that Miley Cyrus 1. loves animals, and 2. is a vegan. So, it was only a matter of time before the singer went under the needle for a tattoo inspired by the vegan movement, which is exactly what she did last weekend. On July 9, Miley took to Instagram to show off her latest piece, which features a sunflower image on the underside of her upper left arm, with leaves that come together at the base of the stem to form the letter “V.”

We may have assumed that Miley Cyrus’ new tattoo was simply a random tribute to her favorite flower if she hadn’t captioned the Instagram snap, “Vegan for life!” She also shared an image of the logo her tat was inspired by, which belongs to Vegan Society. For the “V” in “Vegan,” the company uses the same sunflower image that now permanently lives on Miley’s arm.

Miley Cyrus went vegan in 2014, shortly after her beloved Alaskan Klee Kai, Floyd, was attacked and killed by a coyote, while she was touring the world promoting her 2013 album Bangerz, and she has never looked back. In fact, she hopes to set an example for others by going vegan, and her refusal to consume animal products has already rubbed off on at least one person – her fiancé. Liam Hemsworth followed suit and went vegan a year or so after Miley, revealing to News.com.au in 2016 that he eats “a lot of beans, rice and salads.” 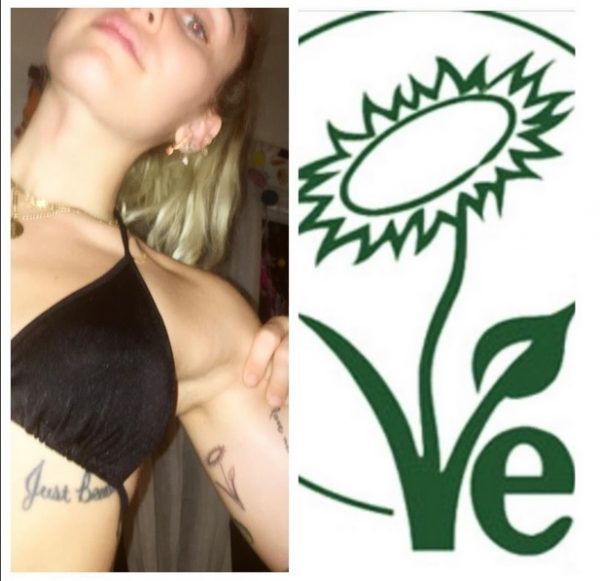 According to Liam, he did some research about cruelty to animals and decided on his own to join the ever-growing vegan movement. “Ethically, I didn’t feel good about supporting those industries. It’s not good for the environment, it’s not good for people and certainly not for animals.” Miley Cyrus’ new vegan sunflower tattoo joins several other pieces scattered across her upper left arm, including her “BIEWTY” tattoo for Cheyne Thomas, the “love never dies” tattoo on her bicep, and portrait tats of her Shetland Sheepdog Emu and deceased pet blowfish Pablow.