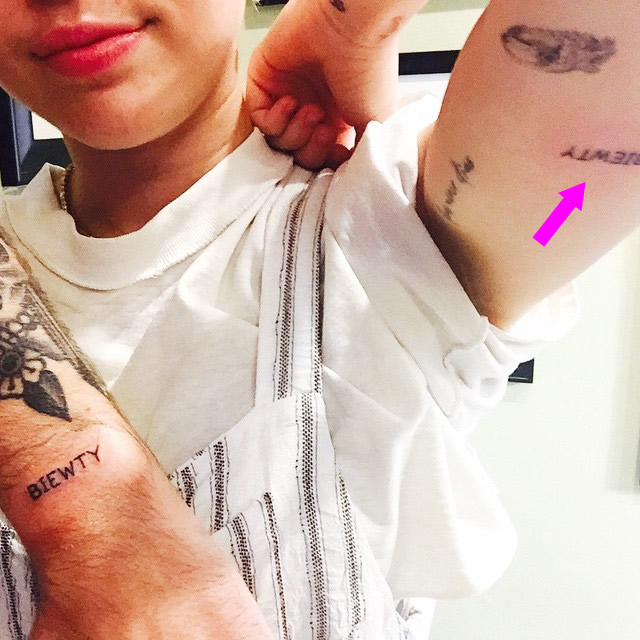 If you follow Miley Cyrus’ Instagram page, you know that she has created what almost amounts to a new language, which she uses to communicate with and about her besties, like assistant Cheyne Thomas and Flaming Lips frontman Wayne Coyne…a new language she has (not surprisingly) commemorated in a brand-new “Biewty” arm tattoo. This new ink marks tattoo number 38 for Miley Cyrus, who has revealed several new-ish additions to her ever-growing tattoo collection over the past few months, including her “I’m in your corner” Johnny Cash arm tat, and a tattoo of a naked woman on her ribcage. Miley Cyrus’ tattoo was reportedly inked at Unbreakable tattoo shop in Studio City, Los Angeles, California.

Miley Cyrus took to Instagram on March 29, to show off her new tattoo, which reads “Biewty” and is inked on the inside of her left bicep in black capital letters, near her “love never dies” bicep tattoo and the tat of her late puffer fish. She captioned the photo “#biewtyispain” and included a shout-out for assistant and close friend Cheyne Thomas, whose arm is included in the photo and sports a matching “Biewty” tattoo inked on his wrist. If you’re wondering what the heck the non-word “Biewty” means, you’re not alone. It’s a Miley-ism if we’ve ever seen one, and, fortunately for you, we keep up to date on these things…

Take a look at any number of Miley’s social media posts, and you’ll notice that she includes the phrase “biew biew,” like, all the time. For example, in November 2013, Miley posted a message on Twitter reading “packing with biew biew @CheyneThomas Amsterdam here we commmmme.” If you haven’t figured it out yet, “biew biew” is her pet nickname for Cheyne Thomas, who used to work at Starbucks before Miley decided to hire him as her personal assistant, and who most people would agree is pretty darn good-looking. The two have been inseparable ever since, and they have been inked together on numerous occasions, including when they gave each other matching smiley face tattoos on their ankles back in July 2014. 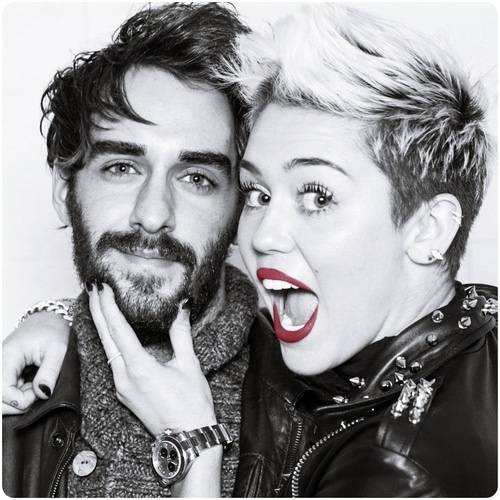 Miley and Cheyne are obviously very close, so we’re not surprised the singer decided to get a new tattoo dedicated to her assistant/BFF/ink buddy/biew biew. After all, she has inked on her body tattoo tributes to virtually every person (and pet) that she holds close to her heart, including a forearm tattoo of her grandmother’s portrait, a ribcage tattoo dedicated to her late dog Floyd, and a giant dreamcatcher tattoo on her side honoring each of her siblings. Just last October, we spotted Miley Cyrus’ tattoo reading “Wukong,” which is her pet nickname for her younger brother, Braison.

Who (or what) will be memorialized in a Miley Cyrus tattoo next? Her pet pig, Bubba Sue?? We can’t wait to find out!!