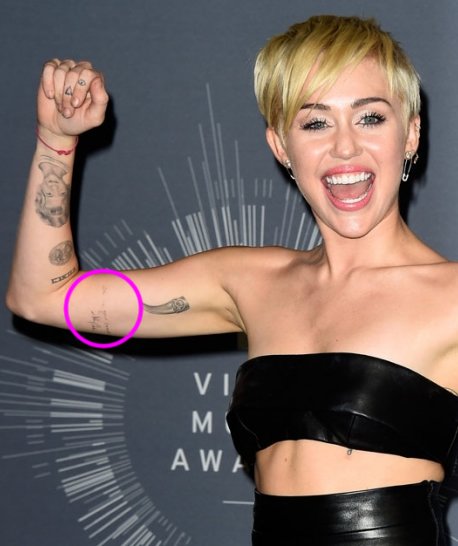 During an appearance at the 2014 MTV Video Music Awards in Inglewood, California on August 24, Miley Cyrus was photographed holding her first-ever Moonman, which she won for her tear-filled “Wrecking Ball” video, and the pop star inadvertently showed off a barely-there tattoo on the inside of her right bicep. Miley Cyrus’ tattoo features the phrase “I’m in your corner” with a signature by Johnny Cash below it, and appears to be done in the country music icon’s own handwriting. Based on the date of the VMA photo and the presence and absence of some other Miley Cyrus tattoos in the picture, the singer’s “I’m in your corner” tattoo was probably inked in August 2014, and appears to be a touching tribute to both her father and the legendary Johnny Cash.

According to a 2012 Country Weekly article, Billy Ray Cyrus credits Johnny Cash in part for inspiring him to write Change My Mind, the country singer’s 13th studio album, which was released on October 23, 2012. As die-hard fans of Billy Ray Cyrus know, the singer received a handwritten note from Johnny Cash in 1992, following the release of his “Achy Breaky Heart” single from his debut album Some Gave All. Although “Achy Breaky Heart” turned out to be a hit that topped the charts, went platinum, and is forever stuck inside our brains (“Don’t tell my heart, my achy breaky heart…”), it was largely ridiculed by critics who disliked the track’s lyrics and pop feel. In the letter to Billy Ray, Johnny Cash encouraged the country singer to keep his head up and have faith that God would provide. 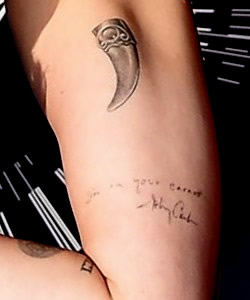 Johnny Cash is considered one of the most influential American musicians of the 20th century, and the fact that he reached out to Billy Ray Cyrus during a hard time in his life certainly means a lot to the singer. “I always feel like Johnny Cash is not very far away from me,” said Billy Ray about the legendary singer-songwriter in 2012, explaining how encouraging words from Cash, like “I’m in your corner,” helped him through some rough times in his life. “I always keep a little bit of that inspiration close to me, inside of me.” It’s fitting then, that Miley Cyrus would also choose to keep Cash’s words close to her, in the form of an “I’m in your corner” tattoo. Miley’s Johnny Cash tattoo is inked in a light gray color, and is located on the inside of her right bicep, in between her animal claw tattoo and the Roman numeral tattoo on her forearm.

This isn’t the first time Miley has gone under the needle for a tribute to her beloved father, whom she considers an inspiration and a role model for the way she wants to live her own life. Way back in 2010, before Miley Cyrus was the tattoo addict she is today, the singer had a tiny black heart outline inked on her right-hand pinky finger to match the same heart tattoos her mom and dad reportedly have on their own pinky fingers. Miley updated the heart tattoo with some eye-catching sparkle in October 2014, but the ink still holds the same meaning for her. And with this new “I’m in your corner” Johnny Cash tattoo on her arm, it’s nice to see that, no matter how crazy Miley’s life has become (and will probably still become in the future), she is still a family gal at heart.

A special thanks to PopStarTats fan Jack Simcox for the tip about Miley’s new tattoo! Follow him on Twitter: @Simcox97