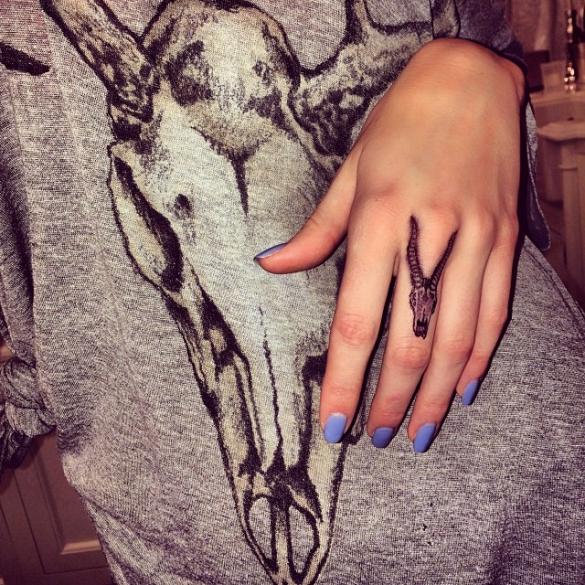 Model and member of the Kardashian clan, Kendall Jenner, is known for her fresh, chic style and clean-cut image, but the 18-year-old proved this week that she may be taking some notes from new beau Harry Styles when she debuted a cool animal skull tattoo on her finger (don’t worry, it’s fake). Apparently, Kendall enlisted talented makeup artist Nat Wood to sketch the Sharpie tattoo on January 21, 2014, opting for an image of an antelope skull inked on the top of her middle finger, between her first and second knuckles. The fake tattoo comes just days after we caught a glimpse of Harry Styles’ tattoos of the Holy Bible, anchor and “Silver Spoon” phrase, all of which are very much real, and we’re wondering if Harry’s obsession with ink will rub off on Kendall anytime soon!

Kendall Jenner debuted her fake animal skull tattoo on Instagram on January 21, captioning the image: “don’t worry, it ain’t real people. creds to: @badwoodx #SharpieTat.” The idea for the fake tattoo was obviously borrowed from the model’s sweater, which you can see in the photo features an almost identical antelope skull, and, despite being inked with a Sharpie marker, is actually pretty well done. Although Kendall Jenner’s tattoo isn’t the real deal, intricate finger tattoos like her ink are becoming more and more popular these days, thanks to Cara Delevingne’s tattoo of an incredibly-detailed lion she had inked on her index finger back in May 2013. The two young models are obviously on the same page in the tattoo department.

It’s been about two months since Kendall and Harry Styles started dating in November 2013, and the two appear to be quite cozy and in love, so it’s not a stretch to assume that the model may draw some inspiration from Harry Styles’ tattoos. It seems like Kendall has been itching for some ink anyway, after having revealed two other fake tattoos last year – a huge skull wearing a Native American headdress on her back and a very realistic-looking Sharpie tat of vertebrae down her spine. And Kendall’s not the only one. The model’s 16-year-old sister Kylie followed in her sister’s footsteps this week with her own realistic Sharpie tattoo of a gun on her side, which resembles the infamous gun tattoo Rihanna had inked on her ribcage in the midst of the shocking abuse charges filed against then-boyfriend Chris Brown in 2009. We can’t wait to see if these Jenner girls get inked for real!