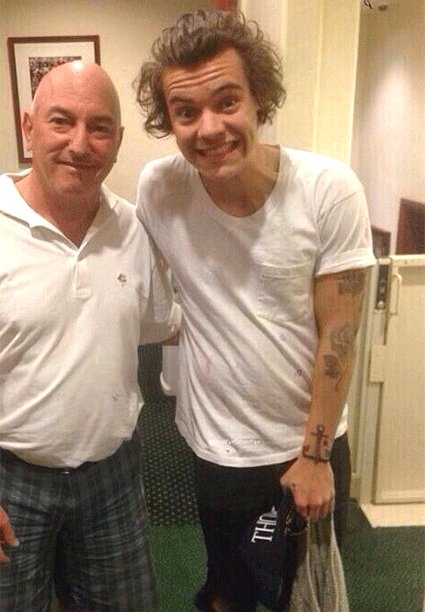 Harry Styles used to sport an “I can’t change” tattoo on his left wrist, but the One Direction singer just got a new anchor tattoo and proved that he can change..his choice of tattoos at least! In a recent picture that was posted online of Harry posing with a fan, you can see that the pop star has covered up his odd “I can’t change” wrist tattoo with a pretty large tattoo of a Popeye-style anchor. With this new tattoo cover-up, we are hoping that Harry may finally be getting over his obsession with random tattoo phrases, and we are looking forward to seeing what other tats the singer may give the ax to in the future. Perhaps “Might as well“or “Can I stay,” Harry??

Harry’s anchor tattoo is inked in black and white and is located on the lower part of his left wrist, near his small padlock tattoo, with the tip of the anchor pointing towards his hand. If he had made the anchor tat slightly bigger, he could have also covered up the tiny padlock tattoo Ed Sheeran inked on Harry’s wrist, which the singer says is “crap.” Since Harry has said in the past that he regrets the padlock tat, among other ink he has acquired in the past couple of years, we think there could be another tattoo cover-up in Harry Styles’ future. Perhaps he’s even planning a sleeve for his left arm…

This is the second nautical-themed tattoo Harry has had inked on his left arm, following the giant ship he had done back in December 2012 with then-girlfriend Taylor Swift by his side. The ship tat sparked rumors that it was inspired by his love for Taylor, but Harry insisted that the ink actually represented home and his family. At the time he got the ship tat done, Harry’s tattoo artist said, “He wanted a realistic looking English ship, because he misses home and needs to remind himself that he’s homeward bound.” Although an anchor is also a nautical symbol, the image typically represents staying put rather than sailing away.

It’s been almost a three-month lull since Harry Styles has gotten inked, and his new anchor tattoo comes amid rumors that the singer is dating Kim Kardashian’s little sister, Kendall Jenner. The two were spotted ringing in the new year with a ski/snowboard trip to Mammoth Lakes in California, and Harry has apparently planned a series of romantic dates for 2014. Is it a coincidence that Harry has traded in his “I can’t change” tat for an anchor tattoo – a symbol of a safe port – while dating new flame Kendall Jenner? We think not!