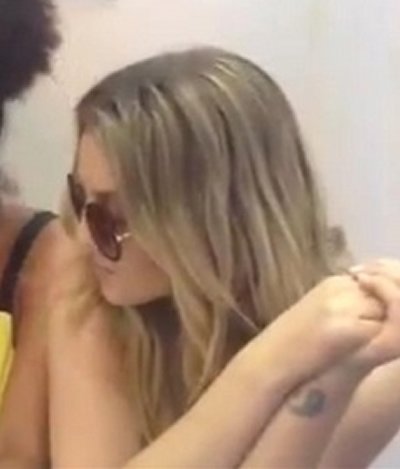 The internet has been in a frenzy ever since Zayn posted a photo on Instagram wearing what appeared to be a wedding ring, and though Zayn has vehemently denied secretly tying the knot with fiancée Perrie Edwards, Perrie did say “I do” to a new tattoo recently – one that matches Zayn Malik’s tattoo of the yin-yang symbol on his wrist! Perrie Edwards’ band, Little Mix, recently recorded a new video diary featuring ideas for their third album, and in it, Perrie is sporting a new black and white yin-yang tattoo in the very same spot on her left wrist as Zayn’s yin-yang tat! Adorbs!

The yin-yang tat was one of the earlier Zayn Malik tattoos (of which he now has more than 40), and the One Direction singer had it inked on the outside of his left wrist way back in September 2011. The yin-yang is an extremely recognizable symbol these days, and the design represents the Chinese belief of duality – that nothing in life can exist without balance. Yin and yang are considered complementary forces that interconnect with one another to form a whole that is greater than either separate part. What better way for Perrie to symbolize her committed union to Zayn than by getting a new yin-yang tattoo?

It was back in June 2013 that Zayn Malik debuted a large portrait tattoo of Perrie Edwards on the upper part of his arm and everyone thought he had gone crazy, considering the fact that love tats are pretty much the relationship kiss of death.

It all worked out for the two of them in the end though, and despite the fact that Perrie said she wasn’t planning on getting a tat dedicated to Zayn anytime soon, the singer has recently gone under the needle for a brand-new tat inspired by one of Zayn’s. What do you all think? Is this Perrie’s idea of returning the favor?