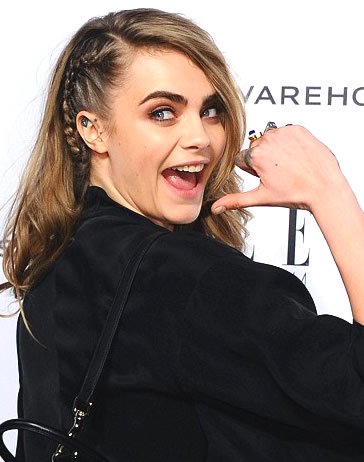 There’s no question that Cara Delevingne is a trend-setter in her own right, but it looks like she may have turned to best gal pal Rihanna for some advice before getting the relatively new tattoo of a diamond inside her ear. While Rihanna rocks a small tattoo of a star outline on the inside of her left ear, Cara Delevingne’s tattoo features an outline of a small black diamond inked in the very same spot inside her right ear. It was during a DKNY fashion shoot in New York in October 2013 that Cara first debuted the cool Southern Cross stars tattoo around her right ear, and the British fashion model chose the Giles catwalk show in London on February 17th to show off the seemingly new diamond tattoo inked inside the very same ear.

While finger tattoos were all the rage a couple of years ago (thanks, again, to Rihanna), tattoos inside the ear have become increasingly more popular recently, especially those inked on the scapha – the flat part near the outer flap of the ear at the top. In fact, the New York Times recently published an article highlighting the growing trend of inside-the-ear tattoos, acknowledging Rihanna’s reputation as a sort of tattoo guru, inspiring 20-something women around the world with her array of tats inked in sometimes unique locations. Cara Delevingne definitely falls into that category of adoring RiRi fans, and it was Rihanna herself who held Cara’s hand when she got her very first tattoo in May 2013.

While posing for photographers at the London fashion show on Monday, Cara showed off her newly designed Cara Delevingne Collection by Mulberry backpack, and, because her hair was braided to one side, the model inadvertently showed off her diamond ear tattoo as well. We’re not entirely sure when Cara’s diamond tattoo was inked, but it was presumably done sometime in October 2013, after she had her Southern Cross ear tat and Roman numeral tattoos done in Rio de Janiero, and before her “silence” wrist tattoo was inked. At that time, Cara Delevingne’s go-to tattoo artist Keith “Bang Bang” McCurdy posted a pic of Cara’s “silence” tat on Instagram, along with the caption: “My girl @caradelevingne newest addition… Met her 6 months ago, now she has 10 tattoos! #hooked.”

From her “Pandora” arm tattoo of her mother’s name to the “Made in England” tat on the bottom of her foot, most of Cara Delevingne’s tattoos hold a deep personal meaning for the model. So, what’s the deal with the diamond tat? It’s obvious that Cara and Rihanna have become the best of friends over the past year, so is it possible that Cara got the diamond tattoo as a tribute to RiRi’s Diamonds World Tour? Back in June 2013, Cara flew out to Barcelona, Spain to watch Rihanna perform her “Diamonds” show live, and then hung out with the pop star backstage. RiRi even tweeted a picture of Cara that weekend, captioning the photo: “Look who just joined the #diamondsworldtour @caradelevingne #thuglife.” Hmm…if that’s the case, we wonder if Rihanna will return the favor with a Cara-inspired tattoo!