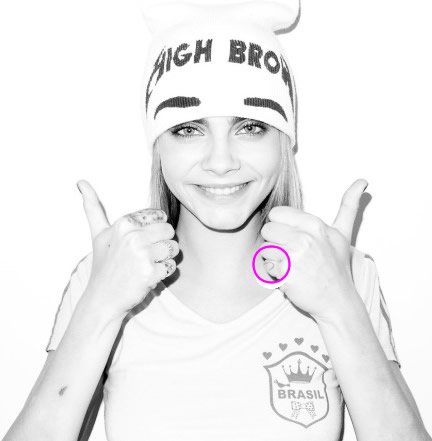 Fashion model Cara Delevingne is all about showing off her rapidly growing tattoo collection, but there are a few pieces that she’s keeping all to herself, like the large red heart tat she has inked on her pinky. Back in October 2013, when Cara’s “silence” wrist tattoo was revealed, we noticed what looked like some new ink on the model’s hand in a photo of her and Keith “Bang Bang” McCurdy standing side by side watching someone else get a tattoo. It wasn’t until Cara posed for a photo shoot with photographer Terry Richardson that we confirmed the heart tattoo on her finger was real. What do you think Cara’s mysterious finger tattoo means?

For some reason, getting a heart tattooed on your pinky finger is all the rage these days, and now Cara Delevingne has joined the likes of Miley Cyrus and Liam Hemsworth’s new flame Eiza Gonzalez with her own take on the heart finger tat. Unlike Miley Cyrus’ tattoo, which is pretty small and inked in black, Cara’s heart tattoo is fairly large (for a pinky tattoo) and is done in red ink. The tat is located just above the base knuckle of her left-hand pinky finger and the model has succeeded in keeping it almost completely hidden until recently. Wondering why? In our experience, pop stars and celebrities sometimes opt for smaller, less visible ink when it has a deeply personal meaning.

Despite the fact that Rihanna once admitted that finger tattoos were extremely painful (she has two), the inked-up pop star accompanied gal pal Cara Delevingne to get her first-ever tattoo – a fierce and very detailed lion on her index finger. Since then, Cara has added plenty of other seemingly painful tattoos to her collection, including her initials “CJD” on the outside of her hand, the Roman numeral 12 on her ribcage, the phrase “Made in England” on the bottom of her foot and now the red heart on her pinky finger. Ouch! This girl seems like a glutton for punishment!

In September 2013, Cara D. commissioned Bang Bang to ink her mother’s name, Pandora, on the inside of her left bicep. The model and her mother obviously share a strong bond, which the 21-year-old decided to put in ink, so it’s possible that the heart tattoo on her pinky is also a tribute to someone special. The model recently canceled a trip to Ibiza for her 21st birthday and instead celebrated with a quiet dinner with her family – 101-year-old grandmother and all. We think it’s super sweet that, despite her incredible success in the modeling industry, Cara still finds time to relax with her loved ones. Way to go Cara!