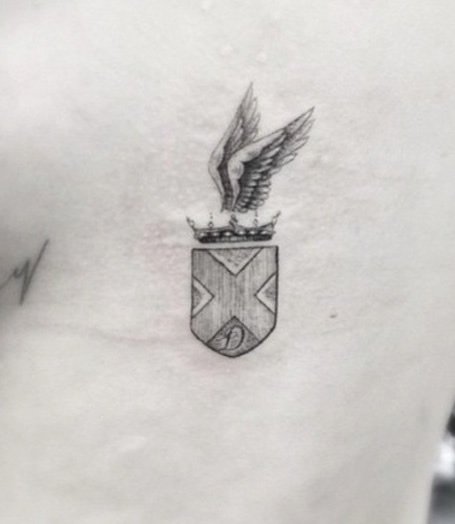 Less than two months after revealing a brand new black wasp tattoo on her finger to match her infamous lion finger tattoo, model-of-the-moment Cara Delevingne took to Instagram to show off yet another new tat: an intricate coat of arms design inked on her ribcage. Cara Delevingne’s tattoo is inked on her left side, just below her armpit and not far from the “be happy” portion of her “don’t worry, be happy” under-boob tattoo. The ink features a small but intricate coat of arms done in black and gray, with a capital letter “D” located at the bottom of the shield, and a small crown and pair of wings inked above the shield.

Cara debuted her new coat of arms tattoo on January 18, captioning the tat snap on Instagram, “I’ve been Woo’d,” a reference to Shamrock Social Club tattoo artist Dr. Woo, who seems to be taking the lead as today’s hottest celebrity tattoo artist. Dr. Woo also posted the photo of Cara Delevingne’s tattoo on Instagram, including the caption, “Lil coat of arms for @caradelevingne last night.” The monogrammed coat of arms tat is obviously a reference to Cara’s British heritage, and was inspired by the royal coat of arms of the United Kingdom. The model is very proud of her background and her hometown of London, and just to prove it, had the phrase “Made in England” inked on her foot in July 2013.

When it comes to getting inked, Cara Delevingne has mostly stayed loyal to New York tattoo artist Keith “Bang Bang” McCurdy, who plenty of celebrities seem to have on speed dial, particularly the inked-up Rihanna. Back in June 2014, Cara had Bang Bang ink the white “breathe deep” tattoo on her bicep and her dove finger tattoo, and the tattoo artist had this to say about his relationship with the tattoo-loving model: “I met her 18 months ago, and now she’s got 14 tattoos.” With this new coat of arms ink, Cara has at least 17 tattoos now, and it appears that she wants to expand her horizons and try out other tattoo artists, turning this time to the talented Dr. Woo of the Shamrock Social Club in West Hollywood, California.

One Response to: Cara Delevingne’s New Side Tattoo is a Winged Coat of Arms!